Today's tattoos were submitted by Rachel McKibbens, who knows, among others, Cheryl, whose beautiful tattoo, appeared here previously. These are, in fact, the first knuckle tattoos appearing on the Tattooed Poets Project: 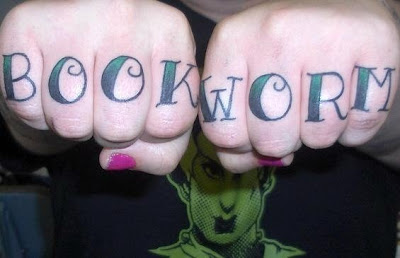 Rachel, who is almost fully-sleeved, writes:

I got this tattoo on April 30th, 2006, at the True Blue Tattoo studio while visiting Austin, TX. [Work from True Blue has appeared on Tattoosday twice before, click here to see]. The artist was Jon Reed. Next to my "ditches" [the inner elbows] this was the most painful tattoo I've gotten to date. I was running out of space on my arms and decided to finally go balls out and get my knuckles done. I was initially going to get " a s d f j k l ; " to represent the home keys of a typewriter, but I realized, since it would have to be upside down and backwards, it wouldn't match up with the actual fingers that rested on them.

At the time, I was teaching poetry at Bellevue Hospital, and I was always encouraging my kids to read. I would give them the books off my shelves, go to The Strand and buy in bulk, etc. I needed them to feel like they weren't confined to the hospital or their group home. One of the writing exercises was to have them come up with my knuckle tatts - two four-letter words that weren't dirty. They came up with some doozies, but nothing that really fit.

I finally came upon "book worm" after my friend Leah's boyfriend suggested it. It was such a logical choice, but the two words never came to me in the months I was searching. It is one of my favorite tattoos. And it's the first thing people see (besides the teardrop below my eye) and, since knuckle tatts have come to have this "tough guy" persona, people always laugh when they see it.

If you like knuckle tattoos, I encourage people to visit Knuckletattoos.com, where I occasionally contribute a piece I've spotted in New York. I would have sent Rachel there, but they posted a Book Worm tattoo knuckle piece here.

Thanks to Rachel for submitting these here.

Please head over to BillyBlog to read one of her poems here.

Jane of All Trades said...

Hey, cool blog. I love how you include peoples explanations of their tattoos with the pictures. I run a blog about UV (blacklight) reactive tattoos. Do you know of any shops in the NY area that do UV reactive work?