I'm going to be a greedy little poet/blogger today and share one of my tattoos (and a tattoo-themed sestina on BillyBlog). We're in our final week of National Poetry Month, and I thought it would be a good time to hop on the bandwagon.

I was hoping to post a tattoo that I've recently had done, but the artist has respectfully requested that I wait to post it until after it has been fully completed. 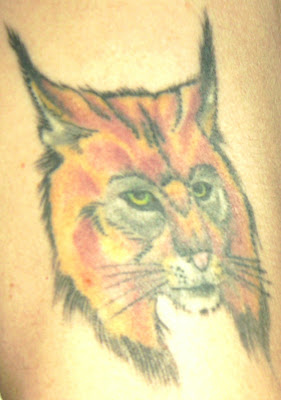 Back then, I was not so involved in tattooing, and I didn't really understand the process. I thought you just went to a shop, picked some flash, and had it inked. Had I known then what I know now, I may have approached the experience a little differently.

The first tattoo is a representation of my oldest daughter, Jolee. She has a Hawaiian middle name, "Lineka," which one English-Hawaiian, Hawaiian-English dictionary told me means "lynx". Not that there are any lynx roaming around Honolulu, but she certainly has the personality and beauty of a lynx, and it just seemed right.

A tattoo artist named "Sickie," who was working out of Body Arts Studio in Bay Ridge, took the flash, modified it by removing all the extraneous bamboo and other background art, and created this version of the wildcat.

He was very proud of himself over the way the eyes came out. I tend to agree. They're pretty cool. Lest you think my younger daughter feel left out, she is also represented on me in the form of a tattoo, previously posted here.

Thanks for indulging me. Now head on over to BillyBlog and read my sestina.
Posted by Tattoosday at 12:19 AM

Siki is an old friend of mine. We were very close for many years, do youhave ANY idea where he is? I've been looking for a long time.