For this, our penultimate post in the April Tattooed Poets Series, we present a tattoo from Eileen Myles.

Last week Thursday, I met Eileen on my lunch break at a Starbucks in Union Square. For a blog based on meeting people with tattoos, it was refreshing to sit and chat with a poet in person. It was only the second face-to-face meeting with tattooed poets. All others have been based on e-mail submissions.

Eileen is a fixture in the New York poetry scene, and has been a resident here since the early 1970's. She's also the first poet featured who I've actually heard read, so I felt like I was re-meeting with an old acquaintance.

Eileen has three tattoos, and I opted to talk to her about the one on the inside of her left bicep: 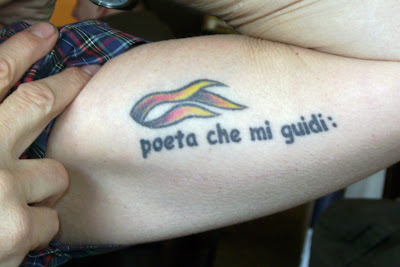 Eileen explained that she got this tattoo back in 2001 (before 9/11 - which led to a whole other conversation). The phrase is a quote from Dante's Inferno (translated by Robert Pinsky), the first part of The Divine Comedy.

In the Italian, the lines are:

Or, as translated by Mr. Pinsky:

Eileen got this line of poetry tattooed as a signpost for her embarking on a novel called The Inferno: A Poet's Novel. 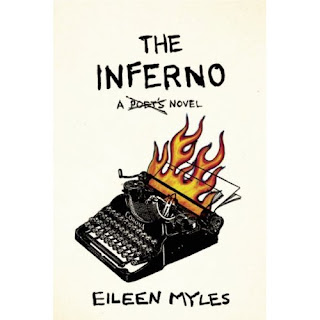 The lines from the original work by Dante are spoken by Dante to the poet Virgil, checking to see if he can handle the journey on which he is about to embark.

Writing as a woman, she draws a parallel to the inferno of Hell with the life of a female poet.

Thanks to Eileen for sharing this tattoo with us here at Tattoosday!

Please head over to BillyBlog to see one of her poems here.
Posted by Tattoosday at 5:55 AM

This is a lovely tattoo!

I'm collecting photos of literary tattoos for an upcoming book, and this would be perfect for it. Here's the official call for submissions -- feel free to pass this on!

THE REST IS SILENCE:

CALL FOR SUBMISSIONS! We are seeking high quality photographs of your literary tattoos for an upcoming book. Send us your ink! Submissions are open to all kinds of literary tattoo work: quotations from your favorite writer, opening lines of novels, lines of verse, literary portraits or illustrations. From Shakespeare to Bukowski to The Little Prince in a Baobab tree, if it's a literary tattoo and its on your body, we want to see it.

All images must include the name (or pseudonym) of the tattoo bearer, city and state or country, and a transcription of the text itself, along with its source. For portraits or illustrations, please include the name of the author or book on which it's based. We'd also like to read a few words about the tattoo's meaning to you -- why you chose it, when you first read that poem or book, or how its meaning has evolved over time. How much (or how little) you choose to say about your tattoo is up to you, but a paragraph or two should do the trick.

Please send clear digital images of the highest print quality possible to tattoolit@gmail.com. Pixel resolutions should be at least 1500 x 1200, or a minimum 300 dpi at 5 inches wide. Text should be included in the body of the email, not as an attached document. Also be sure to include one or more pieces of contact information, so we can let you know if you're going to be in the book.