Today's tattooed poet is Caroline Malone. She was kind enough to offer not one, but three, of her tattoos for our enjoyment.

Here they are, in her own words: 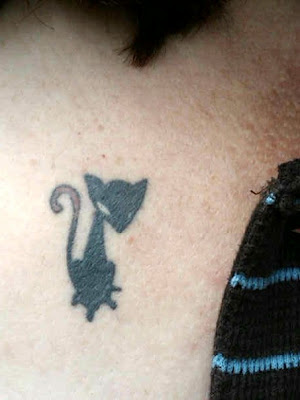 I had always told myself I would never get a tattoo, but then I met someone, someone who turned out to be my sweetheart, who had a tattoo for each of her three novels, and I thought, what a great way to celebrate one’s published work. Since I don’t have a book of poems published, I became concerned that to honor each of my published poems, I would end of up with a substantial part of my body tattooed. So, I opted for a tattoo that would be a tribute to my sweetheart. Also, I love felines as does my sweetheart. I wanted to steer clear of clichés because I do consider myself a decent writer. It took me a few months to find the right design and choose a spot for the tattoo. I’m happy with the location [the upper right side of the chest, near the shoulder], but I probably picked one of the tenderest areas of the body for a needle to repeatedly pierce. The tail of the cat is in the shape of an inverted letter “J,” the first initial of my love, and it’s red because my sweetheart’s hair is red.

I had this tattoo done, as I did the other two, by Anna McClain at Saint Tattoo in Knoxville, Tennessee. Saint has won all sorts of awards. It’s THE place to go for quality, creative work. Anna’s work is distinctive, but you can’t really tell from the Alien cat. If you show your Anna-tattoo to tattoo people around Knoxville, they always recognize it as Anna’s work. My other tattoos show her talent. Anna is quiet and sweet, so even though I was practically shaking with fear over what was about to be done to my body, I went through with it because Anna gave me the confidence. The entire process took about 20 minutes – the tattoo is about as small as she could make it – and the only pain resulted from when the needle was close to the bone (I’m bony).

That first tattoo I gave to myself as a birthday present and the second was a year later, another birthday gift. My sweetheart and I had become close enough that I had a pet name for her, Mermaid, so I decided to have a mermaid tattoo as a kind of promise ring or something. It took me several months to find a design that wasn’t Disney’s The Little Mermaid or a fantasy-style mermaid. I took the design to Anna, and she worked for about 20 minutes to come up with a custom design.

I loved and love the tattoo running down my left hip, like a mermaid floating under the water. Also, I can see the tattoo without having to use a mirror, just like the alien cat. I personalized further by having my sweetheart’s first and last initials lettered in one of the air bubbles surrounding the mermaid. This one took about an hour and a half, and it hurt like hell because again, I’m bony, and the only relief came when Anna worked, briefly, on the small part of the design that extended to my ass. I think Anna was almost as excited about the final product as I was. I knew she liked working with color, and the alien cat was 95% solid black, and then just the snippet of red tail. This tattoo is so sensual and feminine.

My last tattoo came on December 22, my birthday, of last year. My relationship with JW had progressed, and so the moon tattoo is a testament to our growing intimacy. 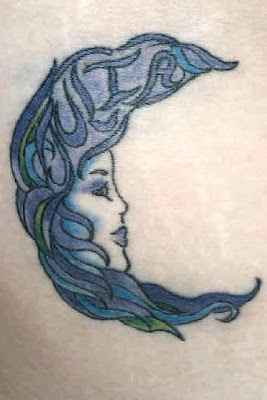 The moon is symbolic for me in many ways, one of which is that one of my favorite novels by my sweetheart has the word “moon” in the title and is an important symbol in the book. I came up with the design by taking a sort of standard shape crescent moon, adding the flowing purple hair, and then asking Anna to add her special touch to it. She nixed my initial request for red hair because she said the moon would not be red, plus it would make it look angry, which is not what I was going for. She was skeptical about my desire to have the entire first name “Julia” in script as part of the moon’s hair, but she found a way to make it work. Anna did the perfect job of choosing colors, again creating such a sensual, dreamy image. My right hip isn’t any tougher than my left one; for some reason, this one hurt worse than the mermaid, and during the last thirty minutes of the process, I could feel my nails (and my nails are nothing to speak of in length) sinking into the little black leather pillow I was cradling. Luckily, I could then concentrate on worrying I was tearing up her pillow instead of the needle.

Before the tattoos, I wrote a poem for my sweetheart, trying to use tattoo as metaphor in a fresh way. I’ve been told the poem works because of its sensual qualities, which is different from other tattoo poems."

A hearty thank you to Caroline Malone, not only for participating in the Tattooed Poet's Project, but for providing such a close, intimate look at her tattoos and the process behind them!
Posted by Tattoosday at 12:01 AM