The following tattoo was submitted by the poet Rebecca Loudon: 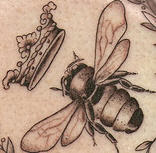 The tattoo was inspired by her favorite poem, "The Lake Isle of Innisfree" by William Butler Yeats:

The Lake Isle of Innisfree

I will arise and go now, and go to Innisfree,
And a small cabin build there, of clay and wattles made;
Nine bean rows will I have there, a hive for the honeybee,
And live alone in the bee-loud glade.

And I shall have some peace there, for peace comes dropping slow,
Dropping from the veils of the morning to where the cricket sings;
There midnight's all a-glimmer, and noon a purple glow,
And evening full of the linnet's wings.

I will arise and go now, for always night and day
I hear the water lapping with low sounds by the shore;
While I stand on the roadway, or on the pavements gray,
I hear it in the deep heart's core.

Rebecca adds that she will include the last two lines of the first stanza will be added "one of these days". The tattoo is on her right calf.

This tattoo was done by Tracy Zumwalt in Seattle, in December of 2008, shortly after my book Cadaver Dogs was published. Tracy used to work at Anchor Tattoo in Seattle, but now works privately by appointment only.

I have other tattoos, but I had been talking about the bee tattoo for 20 years. I was waiting for something, something to celebrated, something to mark. Bees have always been my totem animal and they are prominent in all my writing. Once the book was complete, I knew it was time. I wanted the tattoo to be a scientific rendering but I let Tracy do the artwork. The bee is on the outside of my right calf. The photo isn’t very good because it isn’t really a photo. I just put my leg on my scanner because I don’t own a camera. You can still see Tracy’s fine work in the scan though."

Rebecca Loudon lives and writes in Seattle. She is the author of 4 books of poetry, the latest being Cadaver Dogs from No Tell Books, several lyrics for songs for chamber orchestra and choir, and the libretto of a full length opera, Red Queen. She is a professional violinist and teaches violin to children. She has more than 6 and less than 10 tattoos. She practices writing at http://radishking.blogspot.com/

Head over to BillyBlog to read one of her poems.

Thanks to Rebecca for her participation in the Tattooed Poet's Project!

A Bonus: click here to listen to William Butler Yeats reading the poem that inspired this tattoo!
Posted by Tattoosday at 12:01 AM

Wow, I love it. Funny enough, I'm gonna get a bee on my foot, because I love Sylvia Plath, who wrote three poems about bees =] I hope mine's as good as this!

Thank you t.d. your blog is terrific.
Rebecca

ps. I love those Sylvia Plath bee poems too.

I love this it reminds me of lil kim :) great tat its give me an idea of how I want mine to look :D