Today's tattoos come to us from Craig Arnold, who I found by way of J.D. McClatchy (who is un-inked, but suggested I contact Craig).

He sent these to me from Yakushima in Japan, which, according to Craig, "has lots of Princess Mononoke landscapes but very little internet/phone service".

Craig has two Greek words inscribed on his arms: 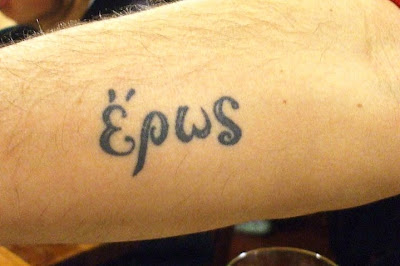 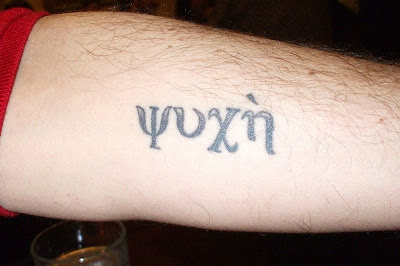 "Both are Greek words: the right arm (Ἔρως) is eros, the left arm (ψυχή) is psyche. They were acquired almost exactly a year apart from each other, right arm in August 2003, left in 2004, both at Lost Art Tattoo in Salt Lake City, Utah. I believe the artist was Dean ... He designed the lettering.

In retrospect there's maybe not much of a story here, but I'll tell what there is of it.

That summer, my then-partner and I were in the early stages of splitting up, after many years together. It used to be -- maybe it still is, in some quarters -- that people got tattoos together at the start of a relationship, to express the beginning of a shared enterprise. But we were never much for going about things in the right order. So, we got tattoos together as the end approached, to remind us of our "irreconcilable differences." On my right arm I got eros -- desire, especially sexual, libido, profane love, but also creation; I think of Whitman's 'urge and urge and urge, / Always the procreant urge of the world.' And on her left, she has agape -- I suppose you could call it divine love, Christian or selfless love, unconditional love,

After a while, though, Eros got lonely and acquired a Psyche. In Greek, psyche can mean many things -- breath or life, spirit, soul, mind and self (thus, psychology). In some parts of Greece it's still used to mean butterfly. But Psyche is also the human girl who falls in love with the god Eros, in the fairy-tale that Apuleius tells in The Golden Ass, one of the earliest versions of Beauty & the Beast. The story is about what comes between them and how they finally succeed in getting back together; I think of it as one of the foundational myths, an allegory for the ways in which Desire and Will depend on and fulfill each other."

Thanks to Craig for sharing his tattoos with us here on Tattoosday. To read one of Craig's poems, please hop on over to BillyBlog here.

Note to anyone reading this today: Craig is MISSING and needs our help. He disappeared three days ago on a volcanic island in Japan. A search is underway but is only required to last for three days. Please spread the word!

There are more details on the facebook page about how you can help.