The Tattooed Poets Project: Amanda's Tattoo Reminds Us that Life is Beautiful

Just a brief note...despite the Tattooed Poets Project for National Poetry Month, I still plan on spotting ink on the streets of New York, and posting photos here.

On Saturday, April 4, my travels took me to the East Side of Manhattan, a part of town I don't usually frequent.

I had run an errand and was about to get on the train back to Brooklyn, when I ducked into a Duane Reade near the subway.

While standing in line, I noticed two young ladies talking to one another. One had the following tattoo inscribed above her left ankle: 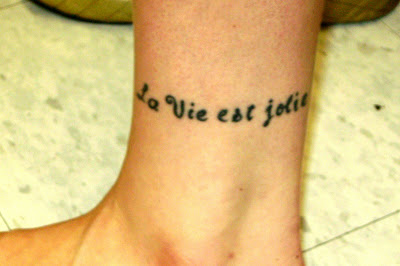 As it turned out, Amanda, who shared this tattoo, was in great spirits. She was getting married later that afternoon. Several of her friends, presumably a bridesmaid or two among them, were standing nearby.

Amanda said that the expression encapsulated her outlook on life and that she loves France and French culture.

Her friend reminded her that she got the tattoo after her first visit to France.

Amanda also has a star tattooed on the inside of her left wrist, but just the two tattoos. A friend of hers, who is a tattoo artist, inked the inscription at his home in the Bronx.

Many thanks to Amanda for being up for talking with me on a day when she surely had bigger things on her mind!

We here at Tattoosday wish you a long, happy, and beautiful marriage!!
Posted by Tattoosday at 12:51 PM

Sweeeeet tattoo. Glad to see you are wearing this beautiful philosophy.

The correct translation would have been la vie est belle.... wich i'm thinking getting on my foot