Charles Jensen and His Cool 13 Tattoo

On this, the 13th day of April, it makes sense to share this tattoo from our next tattooed poet, Charles Jensen: 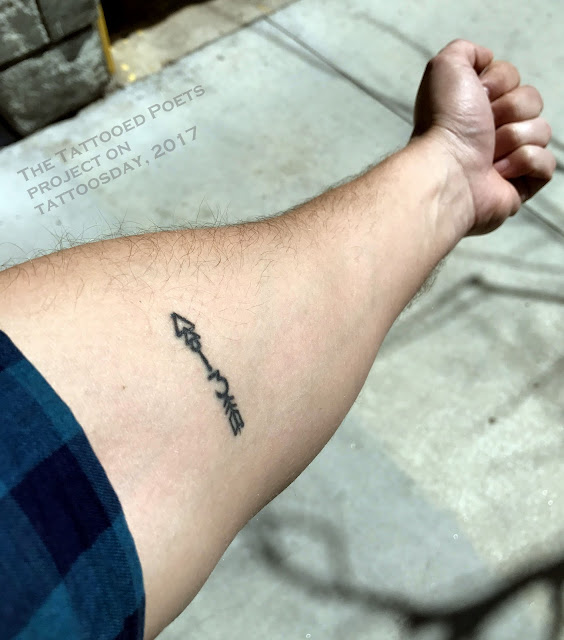 
"I got this tattoo at True Tattoo in Hollywood on a Flash Friday. I chose this particular design because it had the least obvious inclusion of the number 13 (the arrow's shaft), but also because I like arrows: they are both guides to point us in the right direction and weapons to protect us from what would harm us. I got the tattoo at a time when I needed both guidance and protection."

Charles sent us the following poem, which originally appeared here as a Poem-A-Day on Poets.org.


Everyone’s so quick to blame my
tenderness. My wound opening like a mouth
to kiss an arrow’s steel beak.
A beautiful man, now, plants his face
in Trojan sand while I tell
the secrets of his body—
make the ground red with truth.
Red with the death of Achilles, felled
by an arrow’s bite when nothing—
nothing—could puncture his Kevlar skin.
Everyone skips ahead to the moral: don’t
be a heel. For just one day I felt
sun where the chafing bonds of sandal
should have been. Without me, he’d be
just more fodder for the cannon.
I made him a hero, Troy’s poster
boy. Everyone forgets I was part of him,
I needed him—that even as he died,
I tasted each pulse—
that I could not hold back its rush of red
birds or the season to which they flew.
~ ~ ~

Charles Jensen is the author of five chapbooks of poems, including Breakup/Breakdown and The Nanopedia Quick-Reference Pocket Lexicon of Contemporary American Culture, and The First Risk, which was a finalist for the 2010 Lambda Literary Award. His previous chapbooks include Living Things, which won the 2006 Frank O’Hara Chapbook Award, and The Strange Case of Maribel Dixon (New Michigan Press, 2007). A past recipient of an Artist’s Project Grant from the Arizona Commission on the Arts, his poetry has appeared in American Poetry Review, Bloom, Columbia Poetry Review, Copper Nickel, Field, The Journal, New England Review, and Prairie Schooner. He is the founding editor of the online poetry magazine LOCUSPOINT, which explores creative work on a city-by-city basis. He lives in Los Angeles.

Thanks to Charles for sharing his tattoo and poem with us here on the Tattooed Poets Project!

If you are reading this on another website other than Tattoosday, without attribution, please note that it has been copied without the author's permission and is in violation of copyright laws. Please feel free to visit http://tattoosday.blogspot.com and read our original content. Please let me know if you saw this elsewhere so I contact the webmaster of the offending site and advise them of this violation in their Terms of Use Agreement.
Posted by Tattoosday at 3:06 AM