Our next tattooed poet is Matthew Guenette: 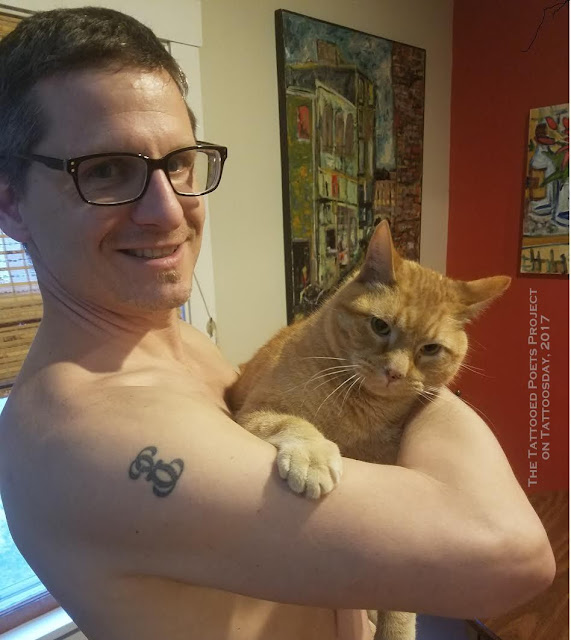 Matthew sent me a few photos and I selected this one because, he explained:


"...THAT tattoo was given to me by the incredible poet (and tattoo artist) Ruth Awad. I was in Carbondale at the time, for a reading, and Ruth gave me and the poet Traci Brimhall free tattoos to commemorate our time there. Ruth did the tattoos in her apartment, in her kitchen if I remember correctly. My tattoo is a '33', with the second '3' reversed, thus creating a kind of '8' that one might also read as an infinity symbol. 33 is how old I was when I got married; a few months later, still 33, my mother died. That the tattoo also makes something of an '8' is for August, the name of my son. I love this tattoo...That it evokes an infinity symbol allows me to pour into the tattoo any number of meanings..."

Ruth Awad appeared on the Tattooed Poets Project last year, here, and the tattoo she gave Traci Brimhall appeared back in 2012 here.

Matthew sent us the following poem, as well:


I Will Not Mention Him

Matthew Guenette is the author of three full length poetry collections: Vasectomania (U. of Akron Press, 2017), American Busboy (U. of Akron Press, 2011), and Sudden Anthem (Dream Horse Press, 2008). He is also the author of the chapbook Civil Disobedience (Rabbit Catastrophe Press, 2017). A Pushcart Prize nominee, his poems have appeared in numerous journals and reviews. He has had residencies at the Vermont Studio Center and the Hessen-Wisconsin Fellowship. A graduate of the MFA program at Southern Illinois University, Matt currently teaches composition and creative writing at Madison College in Madison, WI, where he lives with his wife, two kids, and a 20 lb cat named Butternut.

Thanks to Matt for sharing his tattoo and poem with us here on the Tattooed Poets Project!

If you are reading this on another website other than Tattoosday, without attribution, please note that it has been copied without the author's permission and is in violation of copyright laws. Please feel free to visit http://tattoosday.blogspot.com and read our original content. Please let me know if you saw this elsewhere so I contact the webmaster of the offending site and advise them of this violation in their Terms of Use Agreement.
Posted by Tattoosday at 6:38 AM