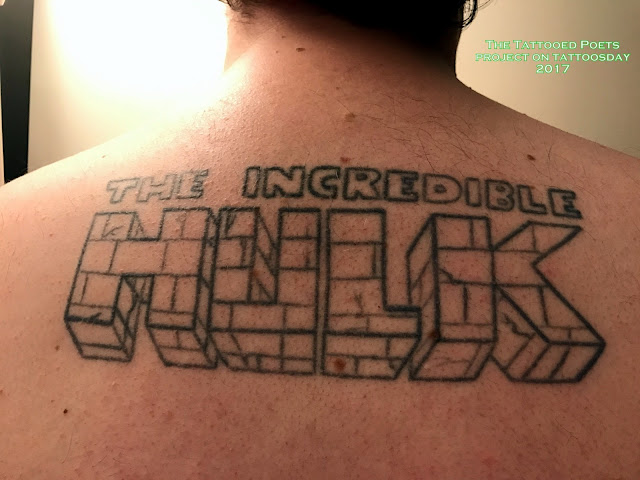 
"I don’t recall which shop I got the tattoo at or the name of the artist, but I do remember wanting this tattoo for a long time before getting it.

Since I was a kid, I’ve been obsessed with the Hulk. He was always misunderstood and, often, attacked for his difference, and I saw myself in him. I was a large kid, extremely socially awkward (once removing a smudge on a classmate’s face without asking), read comics, played D&D (and told people about it), was picked on, and had a hard time making friends because of this. The Hulk was the perfect outcast to see myself in.

Later, and closer to the time I actually got the tattoo, I realized that the Hulk was a challenge to specific types of (hyper)masculinity that I also tried to challenge. Because of my weight, there were a lot of assumptions of the type of man I should be, but I always felt like my exterior Hulk hid my real, interior Bruce Banner. I liked reading and writing and didn’t want to participate in typical rites of passage to manhood, but I pretended to because that was expected. The Hulk/Bruce Banner served as a reminder, though, that what you looked like on the outside didn’t define you.

At the same time I found poetry as another outlet, I also decided I would finally get the tattoo. I figured if I made my obsession permanently printed on my back, I would have to live as myself no matter how green, angry, or misunderstood I became. Plus, I think it looks pretty cool."


Michael sent us two poems, and we are sharing both, entitled “The Mud God” and “A Story of Men”. He explained that "The Mud God," previously published in Apex Magazine in April 2016, "plays with my obsession which comics, work, and masculinity, and I think is most obviously connected to the tattoo I have."  The other poem, which is appearing here for the first time, "deals with a lot of the issues and ideas that [Michael is] obsessed with regarding the Incredible Hulk."

Every morning I wake up heavier,
my throat filled with dirt. What I can’t hack up
I wash down with coffee and cough syrup.
I try to rinse the smell of wet cigarettes
from my body as I pick out
the stones and animals that get caught inside
my chest. When I leave, the world is the same:
The Others walk by, skirts lighting the way,
barely pausing to look beyond the inside
of their eyes. I recognize some, like Grease and Ash,
who ignore me, as I ignore them.
It’s easier to look away than stare
at faces worn like mine. Then I work,
replace the ground dried by the sun with large
pieces of my cheek and the new jobs always
with my back. I yell, as my wounds grow new,
to no-one, constantly. It goes slowly.
Most nights, I drink and bury my head long
enough to want to go home. Every day
I’m less surprised by this life
and consider, for a moment, the tub.
How long would it take to dig through
my stomach, drag as much intestine
as my hands can hold and cram them down my throat
until I found purpose?

A Story of Men

This is a story of men.
Strong men. Tough men. Men who hunted.
Men who had sons who turned into men
who had more sons. These men built things,
got their hands filthy with grease and old age. Men
who were proud to be called men by those they called
men. This is a story

of men. Men who wept when their sons wept.
Men who lost
then tried and lost
and tried again to prove
their genetic disposition toward loss.
They were men with the doors closed,
lights off, eyes fixed on the carpet peaking
between their toes.

These men rose, put on clothes
they hoped made them smell like men
to men who smelled the same.
This is a story of men hoping
to understand what that means.

Michael VanCalbergh is a part-time lecturer at Rutgers-Newark, where he also received his MFA in poetry. When not writing, he can be found dancing in various retail outlets at his daughter’s command. His work has appeared in Apex Magazine, The Collagist, Naugatuck River Review, and others. He is also one half of Words for Dinner, a comedy etymology podcast that can be found on iTunes, Stitcher, and Google Play.

Thanks to Michael for sharing his tattoo and poems with us here on Tattoosday's Tattooed Poets Project!


This entry is ©2017 Tattoosday. The poems and tattoo are reprinted with the poet's permission.


If you are reading this on another website other than Tattoosday, without attribution, please note that it has been copied without the author's permission and is in violation of copyright laws. Please feel free to visit http://tattoosday.blogspot.com and read our original content. Please let me know if you saw this elsewhere so I contact the webmaster of the offending site and advise them of this violation in their Terms of Use Agreement.

Posted by Tattoosday at 5:07 AM