Jessica Lakritz with e e cummings on Her Ribs

We had Goethe this morning, and now we have e e cummings, on the ribs of Jessica Lakritz: 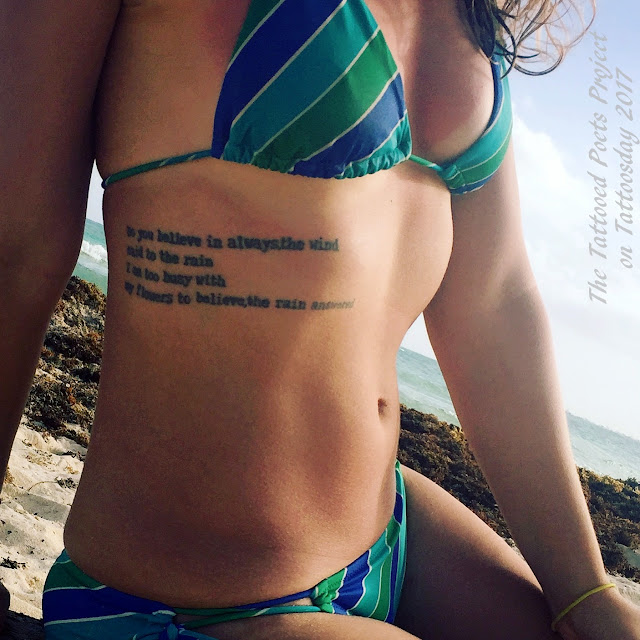 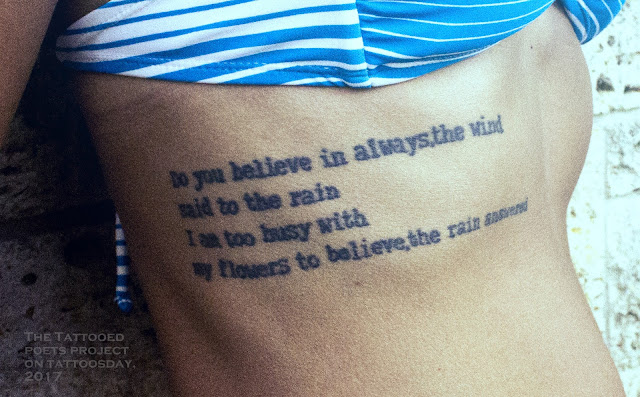 
"The first tattoo I ever got was in 2011, four lines from the ee cummings poem you said Is, and they still ring as true to me as the day Cheyenne Sawyer (@cheyennesawyer) from Atlas Tattoo (@atlastattoo) in Portland, Oregon put them there. I will never forget that he called me the night before saying his hand was slammed in a car door and he wasn't sure if he could do it. It was my first tattoo, and I really wanted it to be perfect, but I also knew he was pretty much the best tattoo artist in the city, and he was squeezing me in a between other tattoos because it wouldn't take long. He had no other openings for months, so I went with it. When he called in the morning, he said he was ok, and I asked, are you sure? He said, don't worry Jessica. And so it went."

This is the cummings poem, in full:


And Jessica sent one of her poems, as well:

Start here: bend over
an open window, floor 4
that’s El Raval screaming
in la madrugada, asking
instead of praying like a slave.
I can feel you
listening, the vibrato
of a hive of bees, can you
choose your thoughts?
Don’t answer. I’ve been a blackbird
circling the temples of the soul,
mostly eyes and longing.
And then I appeared
inside la madrugada
of the mind and the blackbirds
around the temple spelled out
SURRENDER
over that patient piece of sky.
~ ~ ~

Jessica Lakritz (@jessandthesea)  is the author of You Had Me at Topography, which she describes as a "story in poems told using the technique of Julio Cortázar in his novel Hopscotch. She is "a poet, a writer, a dreamer, a traveler, a joy billionaire." Right now, her main project is called Sex on Sundaze, a fascinating adventure "where poetry meets the human body as its canvas." She writes new, original poems inspired by the model(s) featured. She tells us "the project has evolved to create a greater connection between words and our human sense of touch, as a necessary part of writing on people is touching them." You can find Jessica on http://jessicalakritz.com or on http://sexonsundaze.com, as well as on Instagram @sexonsundaze and Facebook facebook.com/sxonsundaze/.

Thanks to Jessica for sharing her art with us here on Tattoosday's Tattooed Poets Project!

If you are reading this on another website other than Tattoosday, without attribution, please note that it has been copied without the author's permission and is in violation of copyright laws. Please feel free to visit http://tattoosday.blogspot.com and read our original content. Please let me know if you saw this elsewhere so I contact the webmaster of the offending site and advise them of this violation in their Terms of Use Agreement.
Posted by Tattoosday at 3:00 PM

It looks pretty creative, but also it is interesting to look at this tattoo after 2 years.