Our next poet, Isobel O'Hare, is sharing two tattoos for Tattoosday.

First up is this cool black and gray piece: 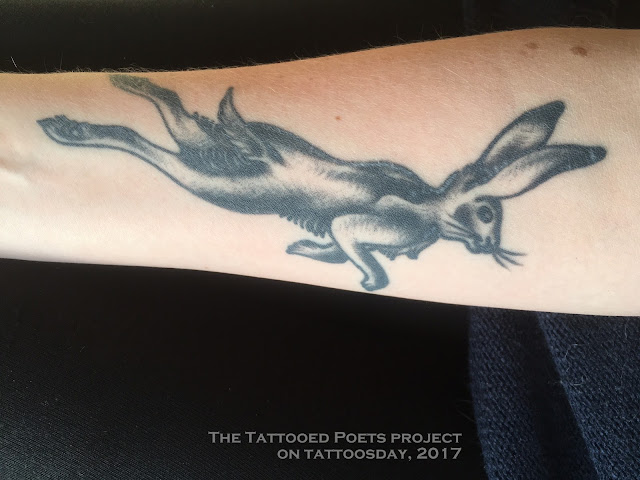 "The hare on my right forearm was both a well-planned tattoo and an impulse tattoo. I had fantasized about it for a couple years before getting it done, and one day when I was feeling particularly anxious and in need of a cathartic outlet, I called a tattoo parlor and asked if they had time to fit me in for a custom tat. I walked in, described what I wanted, and a visiting artist from Los Angeles drew it up and my leaping hare was born.

The hare for me means many different things. Obviously, it is related to my last name, but the wild hare has always been an animal to which I have felt a kinship, as well as rabbits. I've had several house rabbits as pets, and I'm sure I will again someday. It was important to me that the hare appear lively and contented without seeming too cartoonish, and I think the artist did a good job making that happen. Every time I look at him, I smile.

The tattoo is definitely also a nod to Watership Down, which affected me deeply as a child. Sometimes when people ask about the tattoo they'll mention that book and I'll say something about adding some blood to it to make the connection more apparent. I like my hare happy, though.

The hare is named Taliesin after the figure in Welsh folklore who, after transforming into various creatures (including a hare) was consumed by the goddess Ceridwen and reborn through her. There is a lot more to the tale, but you'll have to read the Welsh Mabinogion if you want more than I can fit here.

The hare was done by a visiting artist from Los Angeles (whose name I can't remember) at Temple Tattoo (@templetattoo13) in Oakland, California."

Isobel also shared this other tattoo: 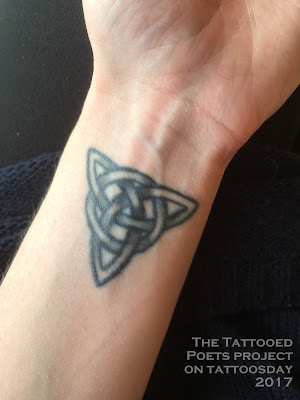 
"The Celtic Trinity Knot on my left wrist was an idea two of my sisters and I had when we were visiting our mother in Virginia. We wanted something to honor our sisterhood, and so we chose this symbol. For me it means a couple other things as well: I went to a Catholic women's college called Trinity, where all of the students referred to one another as sisters, and I belong to a pagan spiritual sisterhood that is rooted in my Welsh, Scottish, and Irish ancestry.

Several people have pointed it out in public and wanted to talk about their Celtic background, too, but my favorite interaction regarding this tattoo occurred in college. I was sitting outside my academic advisor's office waiting to be calling in for an appointment, and a friend walked down the hall and sat next to me. We started chatting and she glanced down at my wrist, saw my tattoo, and asked, 'Are you a witch?'

The knot was tattooed by an artist at Body Art Tattoo Studio in Berryville, Virginia."


Her mother found her in the kitchen

wedged between the branches of an oak chair.

she became an exhibit in this museum of trauma

behind this flap with the little round knob

shunned by her mother

lying in a hospital bed

sick with blame for what has happened

Lift here to see the kindness of neighbors

who     having keys to the house

washed the white towels and returned

everything to the air
that held its breath.

Isobel O’Hare is a Pushcart-nominated poet and essayist who has dual Irish and American citizenship. She is the author of the chapbooks Wild Materials (Zoo Cake Press, 2015) and The Garden Inside Her (Ladybox Books, 2016). Two of her poems appeared in the anthology A Shadow Map, published in 2017 by Civil Coping Mechanisms Press. You can find her at isobelohare.com or on Twitter @isobelohare.

Thanks to Isobel for sharing her two tattoos and poem with us here on the Tattooed Poets Project!


This entry is ©2017 Tattoosday. The poem and tattoos are reprinted with the poet's permission.

If you are reading this on another website other than Tattoosday, without attribution, please note that it has been copied without the author's permission and is in violation of copyright laws. Please feel free to visit http://tattoosday.blogspot.com and read our original content. Please let me know if you saw this elsewhere so I contact the webmaster of the offending site and advise them of this violation in their Terms of Use Agreement.

Posted by Tattoosday at 7:36 AM