Lynne DeSilva-Johnson's Body of Work on the Tattooed Poets Project

Our final tattooed poet in April is Lynne DeSilva-Johnson.

I've been talking to Lynne about contributing for over four years, and I finally met her last summer at the annual NYC Poetry Festival on Governor's Island.

Here are some of Lynne's tattoos: 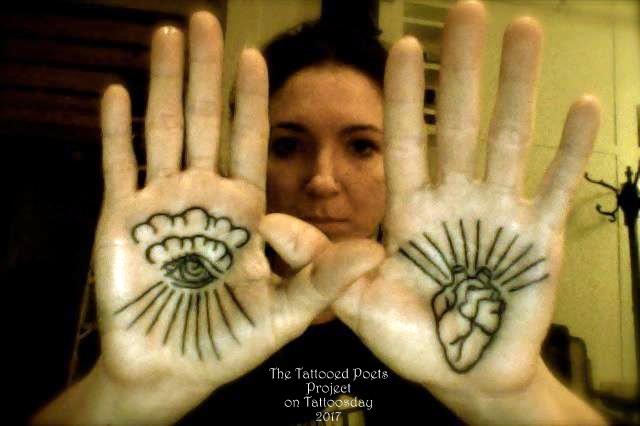 
"The hand tattoos are from 2007. On my left hand is an eye, radiating out -- the all seeing eye combined with the classic symbolism of eye-in-hand, familiar via the Hamsa in particular, and ancient to both Jews and Arabs in the middle east. The all seeing eye, unfortunately connecting us too frequently to illuminati or other ridiculousness, is actually an ancient esoteric visual symbolizing divine light and our connection to it as divine beings. It is consistent in all ancient religions/sacred imagery, predating organized religion but carrying into all faiths. On the right hand is a human heart, similarly radiant. In energy work and healing, it is believed that the left hand receives energy/is negatively charged, 'allows things to happen,' and that the right hand is positively charged/emits energy, 'makes things happen.' My hands symbolize (and stand as a constant reminder to me, and a point of public dialogue) that while we receive light and information via our minds eye/senses, that it must be translated in the body and find a home in the heart, that decisions and actions should come in through the eye but channel out, to the world, through the heart. In keeping with this, I used the following image, (ceremonial rattlesnake disk, found in Moundsville, Alabama) on the cover of my first chapbook, Ground. (2012)" 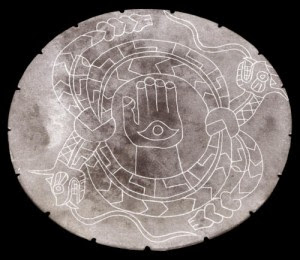 Lynne also gave us a view of her body of work: 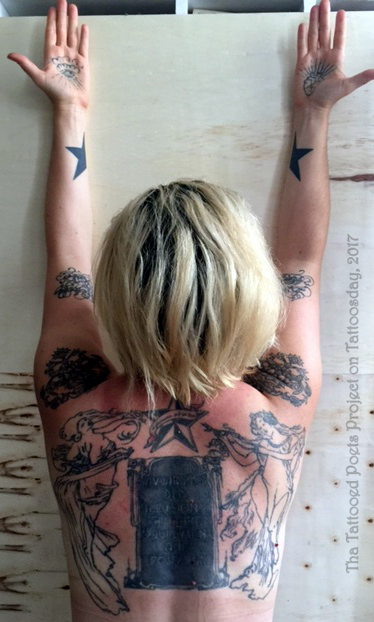 "All the tattoos you see are from the same artist! Alex Sherker. He is amazing. You can find him at Wizard Mountain Tattoo, and often as a visiting artist at shops all over the US, and NZ. Oh wait, not the split star on the wrists...  They're from around 2004 - and were done at Flyrite, 3 blocks from my childhood home and 1 block from my family's old house in Brooklyn. My old partner (now deceased) had the same split stars. They were slightly altered in scale for our different wrists but you couldn't tell when we put them together. The thinking was that you are never a half -- you are always a whole by yourself (complete your own star), but when you join in partnership with another person, you create a new whole. The totally anti-ownership/tagging version of a relationship tattoo. We always said that our future partners, or children, or friends could in fact also get the same piece (still a possibility!) to indicate the new wholes created with our knowing and sharing with each other.

On my back, in the plaque area, in white (hard to see, this tattoo is pretty old at this point) is a quote from Sartre, in French, but which translates to 'have no illusions and do only what you can' -- a bit of a mantra of sorts for many years about balance and duality in life and work , which I always took to mean, boiled down, 'give yourself a break while kicking your own ass.' I got this as I was in a bit of a divorce with the illusions I'd had about academia and the relationship of disciplinary scholarship to ontology and enlightenment, as well as to a necessary distancing from the former partner, who battled opiate and alcohol addictions. It was a bittersweet reclaiming the core of my intentions/desires, as well as a leaving behind a lot of what I thought my life would hold. The female figures are not angels, a common confusion, but rather are from two paintings of Alphonse Mucha -- the left is from his panel representing 'the arts,' this figure being 'Dance' (from 1898) and the right representing 'spring,' from another panel painting of the seasons. I was always very entranced by art nouveau, its marriage of biological/botanical forms and the new technologies of the modern moment -- steel and glass and concrete. As with most back tattoos, and the ceiling of the UN, this is perennially unfinished -- there was a whole plan for botanical and architectural elements surrounding what you see now...!

Somewhere, on the neck, near the nautical star, on a ribbon it also reads 'to thine own self be true,' gotten the day I left a job I felt I had shrunk down and diminished myself to stay at -- a reminder to never do that again (and, by and large, I've kept to that promise!)
On my biceps are tattoos for my daughter, Beckett -- Love Always, on my right, Beckett Rose, on my left. From 2010. My daughter was born in February 2010, conceived manually in a room by myself, the daughter of me and a gay couple, Matthew and Dan, long time friends of a good friend of mine. She was adopted by them fully (the only legal option) in May of 2010. On the day of her adoption I sat for 8 or more hours in Carnegie Hall listening to the Dalai Lama talk about the Bodhisattva path, non attachment, duality, and enlightenment, what I seek here in every way. I do not believe that this legal document controls or defines our relationship, and I continue to be very much her 'Mama Lynne,' a constant part in her life. These tattoos are a reminder for me that I carry her with me every day, and that love is never about ownership or title, love is never about volume of time but quality of that time, of intention and attention and consciousness and being a model for her of the possibilities of family, parenthood, self-hood.

Shoulders, most recent, are my design in collaboration with Alex - lotus based epaulets, traditionally a military symbol, here transformed with lotus -- symbol of peace, enlightenment, and our path through the mud into bloom -- I call them my spirit warrior epaulets, because indeed I am fighting a battle everyday here, not only of my own but in my community, humbly hoping to improve this place."

NOVENA
two swing in unison, one opposing;
the sun's warmth a surprise
amongst fallen leaves, so that
every arm is graced by
unnecessary jacket, armor
for what we thought was coming.
their dog will not pose
for the camera, her every hair on its end,
her nose an antenna for the infinite scents
alit on the wind, on whispers
from the sky's million and one mouths.
look up: that blue is bigger
than anything you can imagine.
why can you feel this wind
on your face, why hear the insistent
caw of unseen birds? the grace
of these mathematics, demurring
behind the face of the mundane --
this is divinity.
I'll write this poem whenever I can,
over and over again
until I die
and what I see before me
will never grow old, will
never cease to be
miracle.

Lynne DeSilva-Johnson is a willful subject feminist killjoy queer official-narrative battler making her way through image, text, and code in the world, currently stationed in Brooklyn, NY. She runs the self-hacking arts organization/press The Operating System, and is an Assistant Visiting Professor at Pratt Institute.

You can find her on the web in these various locales:

You can also enjoy this recent interview with her: http://culturedesigners.com/the-operating-system-detournement-radical-documentation-with-lynne-desilva-johnson/

Thanks to Lynne for sharing her poem and tattoos with us here on the Tattooed Poets Project!


If you are reading this on another website other than Tattoosday, without attribution, please note that it has been copied without the author's permission and is in violation of copyright laws. Please feel free to visit http://tattoosday.blogspot.com and read our original content. Please let me know if you saw this elsewhere so I contact the webmaster of the offending site and advise them of this violation in their Terms of Use Agreement.
Posted by Tattoosday at 8:18 AM