Paige Lewis, Their Narwhal, and Distance (The Tattooed Poets Project)

Our next tattooed poet is Paige Lewis, who sent us this photo: 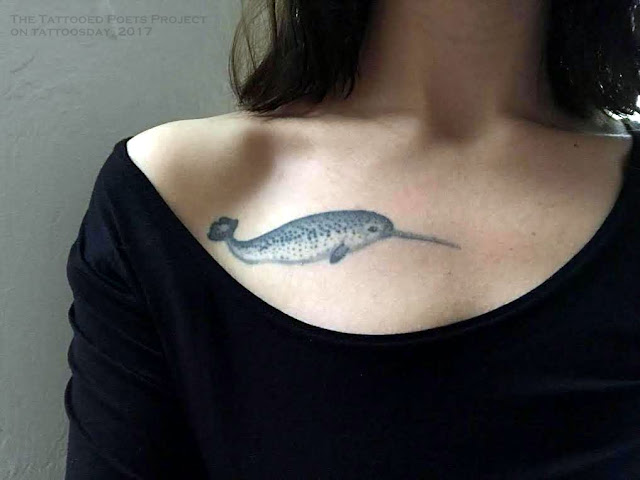 
"I got my narwhal when I was 18, and while it was definitely an impulse tattoo, it's also my favorite one. I had it done at Oddity Tattoo [in Sarasota, Florida] by an artist who went by the name Top Hat Dave. Dave was responsible for my first four tattoos and wore a different fancy hat to each session. It was kind of the best.

Most of my shirts cover up all but the head and tusk of the narwhal, so people often mistake it for a hummingbird. I love when that happens. It makes me feel like I've got some sort of magical shapeshifting tattoo.

More magic: the narwhal can change from chubby to thin depending on how I move my shoulder. It's kind of like that thing where the flag tattoo ripples on a bicep, only it's much cooler than that.

Perhaps the most important thing about this tattoo is that it’s the only one my mom approves of (hi mom!)."

Paige sent us the following poem, as well, which was originally published in Redivider (Issue 14.1 Fall 2016):

It's nothing. The sun, with its plasma plumes
and arching heat, is five million miles closer
to Earth than it was in July, and we are still

alive. Today, I need you to stop thinking
about such small numbers. Throw out your
ruler. Your retractable yellow tape. Send

that blue egg up to its nest unbroken. There
is no way to know how far it fell, so it never
fell at all. No more contests. Tell the dirt

to spit its watermelon seeds back between
children's teeth. Take the trophy buck
from your father's house. He won't be

angry. I promise he won't come looking
for it. Are you willing? What I mean is,
in California, a city celebrates the life

of a firehouse light that's been burning
for over a century. The citizens throw
parades, they take photos and they share

this light live through websites. What I mean
is, this one light can reach as many people
as the sun, and you only have to reach me.


Paige Lewis, whose poems have appeared or are forthcoming in American Poetry Review, Ploughshares, The Massachusetts Review, The Colorado Review, and elsewhere, is the 2016 recipient of The Florida Review Editors’ Award in Poetry, and is the author of the chapbook, Reasons to Wake You, forthcoming from Tupelo Press.

Thanks to Paige Lewis for sharing their cool narwhal and their poem with us here on The Tattooed Poets Project on Tattoosday!

If you are reading this on another website other than Tattoosday, without attribution, please note that it has been copied without the author's permission and is in violation of copyright laws. Please feel free to visit http://tattoosday.blogspot.com and read our original content. Please let me know if you saw this elsewhere so I contact the webmaster of the offending site and advise them of this violation in their Terms of Use Agreement.
Posted by Tattoosday at 6:56 AM