Lauren Krouse and Her Ensō 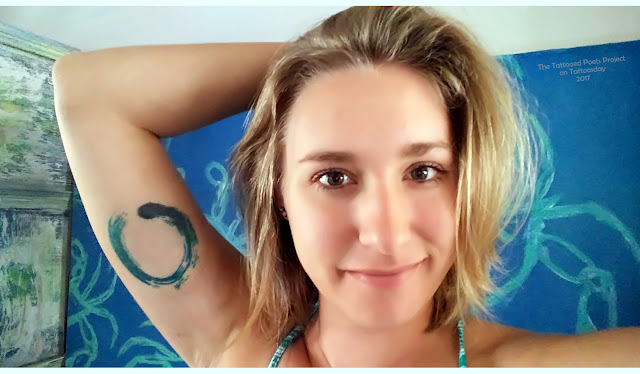 Lauren is sharing this cool tattoo on her inner right arm: 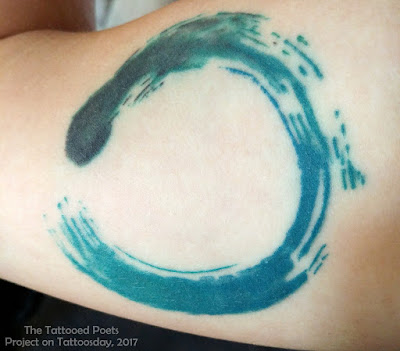 
"My tattoo is an ensō, which is a circle hand-painted in one uninhibited brushstroke, expressing a moment when the mind has let go and the body is free to create. It's a sacred symbol of Zen Buddhism, a philosophy I live by, which reflects the perfection in imperfection and the higher non-dualistic truth of the completeness and fullness of things in emptiness: form is void, and void is form. I got this tattoo at Cape Fear Tattoo [in Wilmington, NC]from Sam Lesher (@tattoos_art_by_sam).

Poetry is nothing but an attempt
at full-absorption for people who think
they feel more than anyone else does.

It’s a practice in ego-maintenance,
a way of honing one’s pretentiousness.
A friend once said to me, “It’s impossible

to be in a poetry class without being
pretentious”: characterized by an assumption
of dignity or importance, especially

when exaggerated or undeserved.
A poet once said to me, “Our class is like
a collection of mental illnesses.”

And I’m still trying to understand
the great anger I have towards poets,
and how despite this, I envy them.

It’s the same anger, the same feeling I had
towards Christians when I couldn’t find God.
They were so frustrating in their faith,

in this belief that things could
really mean something.

it’s a sinking in dark, transparent blue,
your becoming a fluid that slips through
nets, that tangles itself noiselessly.

someone sings like a wisp of light under
water, like the wet sound of a heartbeat
monitor, sibylline, words that rise from

the anger slips away. The sound of hard
running, of soft but calloused feet,
the realization over again that sound
gives way to silence

Poetry is nothing but an outpouring of love so strong
it creates heaving lightness, weary energy, fogged clarity,
something so big-small that it burgeons and ceases,
suffocates and resuscitates, it is enough writing for
the hand and mind to become one, for labels to peel
away, and if you can understand a love so strong it
encompasses hate, like a sadness deepened with joy,
you’re closer than I am to really touching it.

A good poem is a poem that makes me feel something
even if I don’t want to feel it.

A good poem brings to mind words you forgot existed,
like sibylline, and you look them up, and they fit.
A good poem is effortless effort and somewhat miraculous.

Lauren Krouse’s poetry can be found in Lithizine, A Narrow Fellow, Paper Darts, and other
publications. Her poem “black sun” was nominated for the Pushcart Prize. Currently, she is taking a
little break from poetry to pursue her MFA in creative nonfiction at UNC-Wilmington.

Posted by Tattoosday at 2:42 AM