Our next tattooed poet is Paula Coomer, who shared this tattoo: 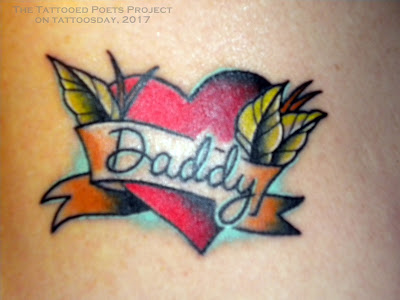 
"As it is with many people, tragedy inspired me to get my second tattoo. My father froze to death after his truck went off the road in December, 2015. For whatever reason, even though he never drove after dark, on this particular evening he realized he’d forgotten to pick up the mail and was worried about a bill. By all accounts, the worst fog in memory had set in, causing dozens of accidents. My mother went on to bed, awakening only when the deputies knocked on her door the next morning.

I moved out West in my early twenties, so the news meant, for me and my husband, twenty-four-hundred miles of road trip. For more than fifteen years, since my father’s first stroke and my mother’s onset of dementia, I had traveled regularly back and for to oversee their well-being, cooking and stocking the freezer, cleaning. They refused to budge from their rural, isolated home. We could have flown, but closing down their house and moving my mother to live with my brother in North Carolina was going to require weeks of time and as many pickups as we could collectively provide.

The funeral, the sorting, packing, clearing out, and moving my mother took nearly three weeks. We loaded our truck with a share of her belongings and followed my brother to North Carolina. As we are vegan and eat as much as possible only whole, organic foods, the first day we drove to Boone, half-hour from my brother’s house, to shop at an organic market. We decided to tour artsy downtown Boone, but first had to find a restroom. Store after store turned us down. Not so at Speakeasy Tattoo. The staff welcomed us open-armed, and, after learning that the owner was my same ethic mix (Scottish, Cherokee, African), while my husband was in the loo, I decided on the spur of the moment to set an appointment to get a heart-shaped tattoo that said, 'Daddy.' I envisioned three leaves, representing the tobacco leaves that his father had grown from tiny starts on our ancestral land in Kentucky, one each for me and my two siblings. My father had grown up plowing those fields by walking a single-tree plow behind a mule’s rump.

Getting the tattoo gave me a reason to focus on caring for a piece of myself. The weeks and months and years of monitoring my parents long distance had worn me to an unhealthy mess. Caring for my skin during the healing of the tattoo began my year-long journey back to health."

There should be a poem for a dead father.
A place in all these books to say, I can't comfort
you in my own words, so here it is in somebody
else's. I should be able to look out at this tree,
grouchy and vacant from the winter befallen it
and the squirrel who carries nuts from handouts
to the sizeable pothole holding his horde, and find
something logical to seize up the wound: it was
his time; he's better off this way; at least
he's no longer suffering.

As if living were suffering anyway.

But in all these places made and given, nothing
will soothe a girl whose father has vanished
into vacant and wind.

I hope he lived well with the little girl
hearts you made of paper hanging red
on the fridge.

And I hope he believed in daughters.

And loved the miracle of lightning.

And the hard-learned way imagination
is nothing
close to the truth
of how things eventually happen
and end.

Paula Coomer holds an MFA in Creative Writing from the University of Idaho and for many
years taught in the English Department at Washington State University. Her most recent books
are the novel Jagged Edge of the Sky, food memoir, Blue Moon Vegetarian, and follow-up
cookbook, Blue Moon Vegan. Other books include Dove Creek, a novel based on her years as a
public health nurse for the Indian Health Service, and Nurses Who Love English, poems about
the years following 9/11. Ms. Coomer lives near the mouth of Hells Canyon in Clarkston,
Washington, where she coaches writers, invents recipes, and organizes and facilitates Clearwater
Writers, a retreat program on the Wild and Scenic Clearwater River near Syringa, Idaho. For
more information, go to www.paulamariecoomer.com.

Thanks to Paula for sharing her tattoo and poem with us here on The Tattooed Poets Project!

This entry is ©2017 Tattoosday. The poem and tattoo are reprinted with the poet's permission.
If you are reading this on another website other than Tattoosday, without attribution, please note that it has been copied without the author's permission and is in violation of copyright laws. Please feel free to visit http://tattoosday.blogspot.com and read our original content. Please let me know if you saw this elsewhere so I contact the webmaster of the offending site and advise them of this violation in their Terms of Use Agreement.
Posted by Tattoosday at 3:16 AM

Dearest Paula, this tattoo story gives my heart great joy! And my eyes a few gentle tears. A very auspicious week for me and you-as I was notified this eve that I won a scholarship to attend a very special Ukulele Camp week in Port Townsend at Centrum. Feels that the stars are aligning in some positive ways, and do we all ever need some of that now! Hugs, my Friend!