I've been emailing with Liz Dosta for five years about participating in the Tattooed Poets Project. This year, the stars aligned and we were finally able to connect on a submission. This is her tattoo: 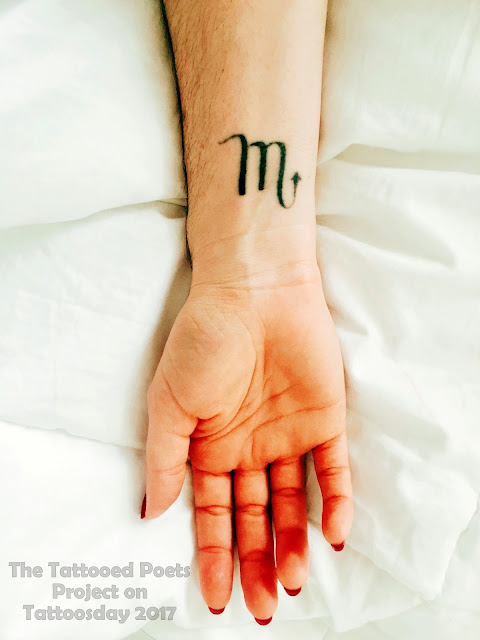 
"The tattoo in this picture is the Greek symbol for the astronomical sign, Scorpio. I am a double Scorpio; my rising sign is Scorpio as well. This means that I am a Scorpio to my core. My friend, Quyen Dinh (@parlor_tattoo_prints), gave this tattoo to me about thirteen or fourteen years ago. It was summer, and we were sitting on her bed in Irvine, California. I remember it being very hot and having to fan myself with my other hand as she worked on my wrist. This was my first tattoo, and I got it at a time when I was friends with a group of female Scorpios (Quyen tattooed each of us, in fact, with this symbol, though in different places). Quyen Dinh is a fantastic artist and painter in her own right, but she was not a practiced tattoo artist at this time. She had managed to MacGyver a tattoo gun using a VCR motor, a sewing needle, and the tip of a No. 2 pencil's eraser. She used this 'gun' only on herself to get the hang of tattooing. When her mother found out, she became so frightened, that she bought Quyen a proper tattoo gun. This is the gun that she used on the rest of us. To this day, I think fondly of this tattoo, and all that it represents.

Liz sent us the following poem, as well:

Here is the thing:
I was born and my father, John, named me Elizabeth.
Even then,
an operatic twilight inside me sang. Even then the river diverged
as I spoke my first word,
red and not Dad.
Had I been a boy
he would have named me Duke, after John Wayne,
but the joke
was on him, because I thought I was a boy, or
in wanting boys I dressed like a boy:
in overalls and white shirts
pulled at the neck. I cut my chestnut hair
butch I guess, right below the ears.
Anything beyond the stars
was mine because mother
gave me a telescope.  My one eye
could see so far. Looking into the fire
within a fire, nothing failed me then.
But that's a lie I tell myself.
This story begins with a man stumbling into a room.
This man is my father.
He has mistaken the kitchen for a bathroom, the trashcan
for a toilet. Quarters are spilling
everywhere. Everything
inside the kitchen is breaking apart.
A fork shatters and the pieces flutter fast, like a wing.
I reach for a wing,
I find myself chasing his birds around the room.
They do not sing.
Not yet.

Liz Dosta is a poet and artist whose work has appeared in The Atlas Review, Interim, Locomotive Mag, Pank (Queer Issue) and Two Serious Ladies, among others. She lives in Brooklyn. You can find her art work on Instagram: @liz_dosta.

Thanks to Liz for sharing her tattoo and poem with us here on the Tattooed Poets Project on Tattoosday!


If you are reading this on another website other than Tattoosday, without attribution, please note that it has been copied without the author's permission and is in violation of copyright laws. Please feel free to visit http://tattoosday.blogspot.com and read our original content. Please let me know if you saw this elsewhere so I contact the webmaster of the offending site and advise them of this violation in their Terms of Use Agreement.
Posted by Tattoosday at 4:10 AM