Today's tattooed poet today is Keri Smith, who sent in the photo: 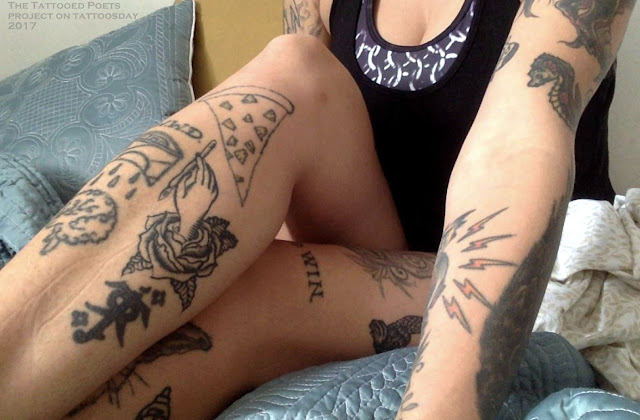 Check out the hand emerging from the rose. Keri explains:


"This tattoo on my leg, of the hand holding the pen, was given to me by Mike Taylor in his loft in Bushwick last August. Mike has been making a great zine called Late Era Clash forever, and has been one of my favorite artists for a long time. Mike recently told me he was working on getting all of his screen printed zines into a cheap art book because if his work wasn't accessible to people with less money or less access to the art world then it wasn't really art.

The zine Mike used to do in Gainesville was called Scenery and in one of the issues (it's
a graphic zine) there's a story about some radical punks burning down a condominium going up in a low income neighborhood. Along with some academic language about gentrification, the zine had a big impact on me a young teenager. I asked Mike what he thought about gentrification while he tattooed me, since we were artists sitting in a loft in Bushwick. He said as an artist and as an art teacher he tried to do what he could and make good choices. He referenced a bar around the corner that had been owned by an older Hispanic man for decades, who had been trying to get his liquor license forever. He was denied, but the white tenants who took over the space got it and were able to open a bar. He said he would never go there, and that's where the line about arbitrary battles shows up. I think about it a lot, and luckily, still get to see Mike often too."

Keri shared the following poem which references Mike and her tattoo:

While tattooing me you said
everyone's free to wage their arbitrary battles
while we talked about gentrification
you didn't mean the whole of Bushwick
or burning down condominiums
just that you wouldn't go to that new spot
on the corner
ever
I wanted a beer and went with my leg
all wrapped up and dripping it was August
and inside saw all the white punks drinking
imported beer and I paid my tab went home
alone and kind of got what you mean.

Originally from Gainesville, Florida, Keri Smith is finishing her MFA in Poetry at The New School
in New York City. She bartends at night at a few bars in Brooklyn and during the day works for
Hanging Loose Press. She has recently been published in The Inquisitive Eater online and in
Hanging Loose #108 in print. She intends to stay in New York after she graduates because the
used bookstores here make her swoon.

Thanks to Keri for sharing her tattoo and poem with us here on Tattoosday's Tattooed Poets Project!

If you are reading this on another website other than Tattoosday, without attribution, please note that it has been copied without the author's permission and is in violation of copyright laws. Please feel free to visit http://tattoosday.blogspot.com and read our original content. Please let me know if you saw this elsewhere so I contact the webmaster of the offending site and advise them of this violation in their Terms of Use Agreement.
Posted by Tattoosday at 3:17 AM