Our next tattooed poet, Ryan Black, has some amazing work on his arms: 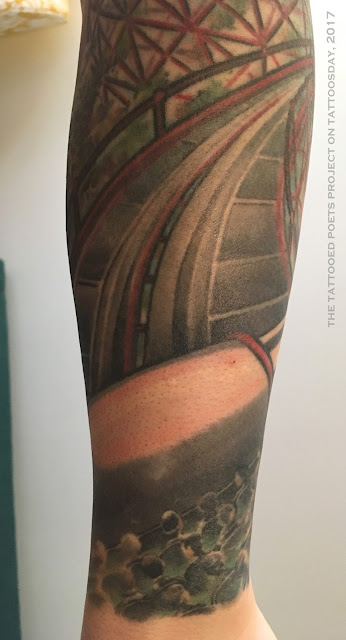 Ryan tells us that the tattoo that dominates his arm


"references a 1952 film titled This Is Cinerama, which opens with a shot from the front of The Atom Smasher, a wooden roller coaster at Rockaways' Playland in South Queens. I grew up taking the A train to Rockaway Beach every summer in the late 80s/early 90s, a different time in the history of New York City. Rockaways' Playland was abandoned by then, and my friends and I would race through the shuttered park. I thought the opening of This Is Cinerama would make a graphically interesting tattoo. The artist is Tommy Helm (@tommyhelmart), who runs Empire State Studio (@empirestatestudio) [in Amityville, NY]. I've known Tommy for about 15 years."

Ryan also sent us the following poem, "This Is Cinerama," which, he explained "works with the same source material." The tattoo predates the poem, which first appeared in Ploughshares.


Because the foot fractures, because the body turns soft. Because
the mind says six miles nine miles twelve miles, and I haven’t run
in weeks. Because another relationship is ended, I take two Advil,

and go to the movies. A retrospective; the sixtieth anniversary print
of This Is Cinerama, Lowell Thomas’s love note to technology
and travel. It opens with Thomas, in black and white, behind a desk

littered with paper, lecturing on a history of representation. Cave
drawings, Egyptian murals, the Renaissance on the verge of motion.
Then motion: Kircher’s magic lantern and the zoetrope, Mathew Brady,

father of photojournalism, bringing his studio to the battlefields
of the American Civil War. By the time Edison enters the narrative,
Lowell Thomas has turned reverent. The Black Maria, the penny arcade.

Valentino and Banky. Then, Ladies and gentlemen, he intones, sounding
every bit the showman he’d become, This Is Cinerama, and the curtain
opens, revealing a louvered screen curved in ratio to the retina.

It’s 1952. Rockaway Beach. To demonstrate the full scope of their vision,
the filmmakers have rigged their tri-lens camera to the front car
of the Atom Smasher, the wooden roller coaster at Rockaways’ Playland.

I walked its ruins as a boy; a housing complex, now. A shopping center.
But, tonight, its motored gears clack and catch as we climb the lift hill
to a pan vista of the Atlantic shoreline, then drop like a bucket

into the first banked turn. The audience howls; they throw their arms
into the air. The images are dizzying. The man beside me records
the sequence on his cell phone. But the tone shifts by a long dissolve,

and we’re taken to Milan, to La Scala and the Temple of Vulcan.
It’s the first-act finale of Verdi’s tragic opera, the grand set piece where
Radamès and Aida will later be entombed. The camera’s static, mournful.

of Europe, the Basilica San Marco, monuments to fallen empire,
though somewhere between the Schönbrunn Palace and Zaragoza’s
Plaza de Toros, I lose interest, my mind wanders. I think of you.

Of your mother’s dying. How I heard it from a friend, who spoke plainly,
as if discerning the weather. We’d been out of touch, you and I,
for more than a year, but I wanted to find you, then. To go to you.

To say something to a life without her. I wished I’d been there when
you learned; a stranger to your grief. I was still a boy when my father
died. Foreign to me, now, that loss was absolute, unadorned. And so,

it was manageable. I cried in spasms until I slept. A vexed relationship
persists, I think. Nothing cools. When the movie ends, I sit slumped
in my seat until the lights come back, until an usher eyes me from

across the theater. I want to show someone how they got it wrong.
You missed the point; you got it wrong. But I’ve been telling stories,
again. I’ve been talking to myself. The truth is: I haven’t been

New York is out of sorts. Because another relationship is ended,
I can think of nowhere else, no one else but you. We walked North Beach,
talking about adaptations, about Flushing Meadows, La Flor Bakery,

about your mother, who was gone, and, what more, I can’t remember.
We said goodbye at Fourth and King, and the waning light made your face
look younger. And knowing. Later, I followed the basin to AT&T Park,

bought a ticket from a scalper, in the left-field bleachers. There was no
moment of her going, nothing to call back or contend. You can’t spend
what you ain’t got, the song goes. Can’t lose what you never had. I tried

calling in the seventh, but you didn’t answer. The Giants tied it in the ninth,
then won it on a walk-off.

Ryan Black is he author of Death of a Nativist, winner of the 2016 Poetry Society of America National Chapbook Fellowship, selected by Linda Gregerson. He was a finalist for the 2016 Alice James Award and the 2015 Auburn Witness Poetry Prize. He has published previously in AGNI, The Journal, Ninth Letter, Ploughshares, The Southern Review, and elsewhere, and has received fellowships from the Adirondack Center for Writing, The Millay Colony for the Arts, PLAYA, and the Queens Council on the Arts. He is the Director of Undergraduate Creative Writing at Queens College/CUNY and lives in Jackson Heights.

Thanks to Ryan for sharing his cool tattoo and poem with us here on Tattoosday's Tattooed Poets Project!

If you are reading this on another website other than Tattoosday, without attribution, please note that it has been copied without the author's permission and is in violation of copyright laws. Please feel free to visit http://tattoosday.blogspot.com and read our original content. Please let me know if you saw this elsewhere so I contact the webmaster of the offending site and advise them of this violation in their Terms of Use Agreement.
Posted by Tattoosday at 6:04 AM