Our next submission comes to us all the way from Egypt, on the flesh of Andy Young: 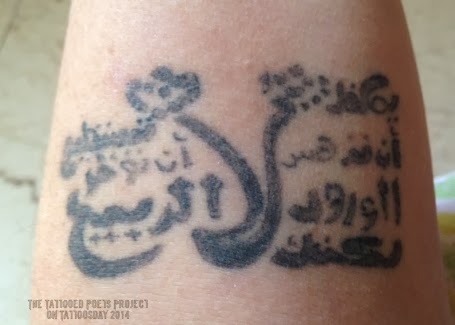 This unusual piece located on her left forearm was done at Nowhere Land in Zamalek, Cairo, Egypt, by a female Italian artist whose name is Orne Gil.

Although the tattoo is in Arabic, it is actually a translation of a quote by Pablo Neruda and, in English translation, reads: "You can crush the flowers, but you can't delay the spring." Andy also credits the design of the tattoo to Islamic art historian and revolutionary street artist Bahia Shehab, who works with her at the American University in Cairo.

She summarized this further by sending along an excerpt from the project this design came from, via the website "Walls of Freedom: Street Art of the Egyptian Revolution":


"Bahia Shehab collected a thousand different visual representations of the word 'no' printed, stitched, molded, engraved and cast over the past 1,400 years on vases, tombstones and walls, in locations as far-flung as Spain and the border of China. She called the installation A Thousand Times No.  After the Revolution Shehab began to see a connection between A Thousand Times No and her country’s situation. She took to the streets, spray-painting 'no' on walls throughout Cairo.

'I did not feel that I could live in a city where people were being killed and thrown like garbage on the street,' Shehab said, describing her first image, which read 'no to military rule' in a script taken from a tombstone. 'A series of ‘no’s came out of the book like ammunition.'

Some of the 'no's that followed: No to a new pharaoh. No to violence. No to killing men of religion. No to burning books. No to the stripping of veiled women.

This particular quote by Pablo Neruda was found in a field hospital during the early days of the revolution. She speaks about it toward the end of this short TED talk which details this project:
A Thousand Times No."

Andy sent along the following poem, which is the title poem from her chapbook The People is Singular (titled "Mubasher" in the book):

The People is Singular

in the dark
a white-lit
screen: watercannons

which way will
the army
go chanting pours

the screen
shows
screens in Tahrir

gone black
the Square
itself black

except for
the flashes
should we mute

yuri what
the hell
does it mean

the people want
the people
want the fall

of the fall
of the you
say they say

the people
want bread
the barrier between us

and our president
was broken
by teargas says a man

in the news
who cannot
mute cannot shut

the screen to teargas
a fog from
this distance up close

the canisters
expired dates
made in

etched in metal
in Arabic
“the people” is

singular which
does not
translate

The chapbook from which this poem comes was released by Press Street Press in 2012, and is a collaboration with Alexandrian photographer Salwa Rashad. You can get more information on The People is Singular here.

We are posting this today, April 6, because Andy told me it's an important anniversary today:


"This was the date [in 2008] of a worker's strike in Mahalla, which was an early inspiration for the Egyptian revolution.  An activist movement named for the date was formed in support of the workers and was later actively involved in the Jan 25 uprising. The founders were arrested in November as part of the new anti-protest law and sentenced to three years in prison. So the date encompasses a lot: the fact that there was opposition to the abuses of power in Egypt long before 2011, particularly among workers' groups, as well as the fact that many activists are being imprisoned by the repressive powers of the State today."

Andy Young's poems, essays, and translations have been featured internationally and in the Los Angeles Review of Books, Callaloo, Guernica, and the Norton anthology Language for a New Century. Since 2012, she has been dividing her time between New Orleans, where she works for the New Orleans Center for Creative Arts, and Egypt, where she works for the American University in Cairo. Her first full length collection is forthcoming this fall.

We are thankful beyond words to have Andy's contribution, in both image and verse, here on the Tattooed Poets Project.

Posted by Tattoosday at 3:01 AM