Our next tattooed poet is Marcelo Hernandez Castillo, who sent us these wings: 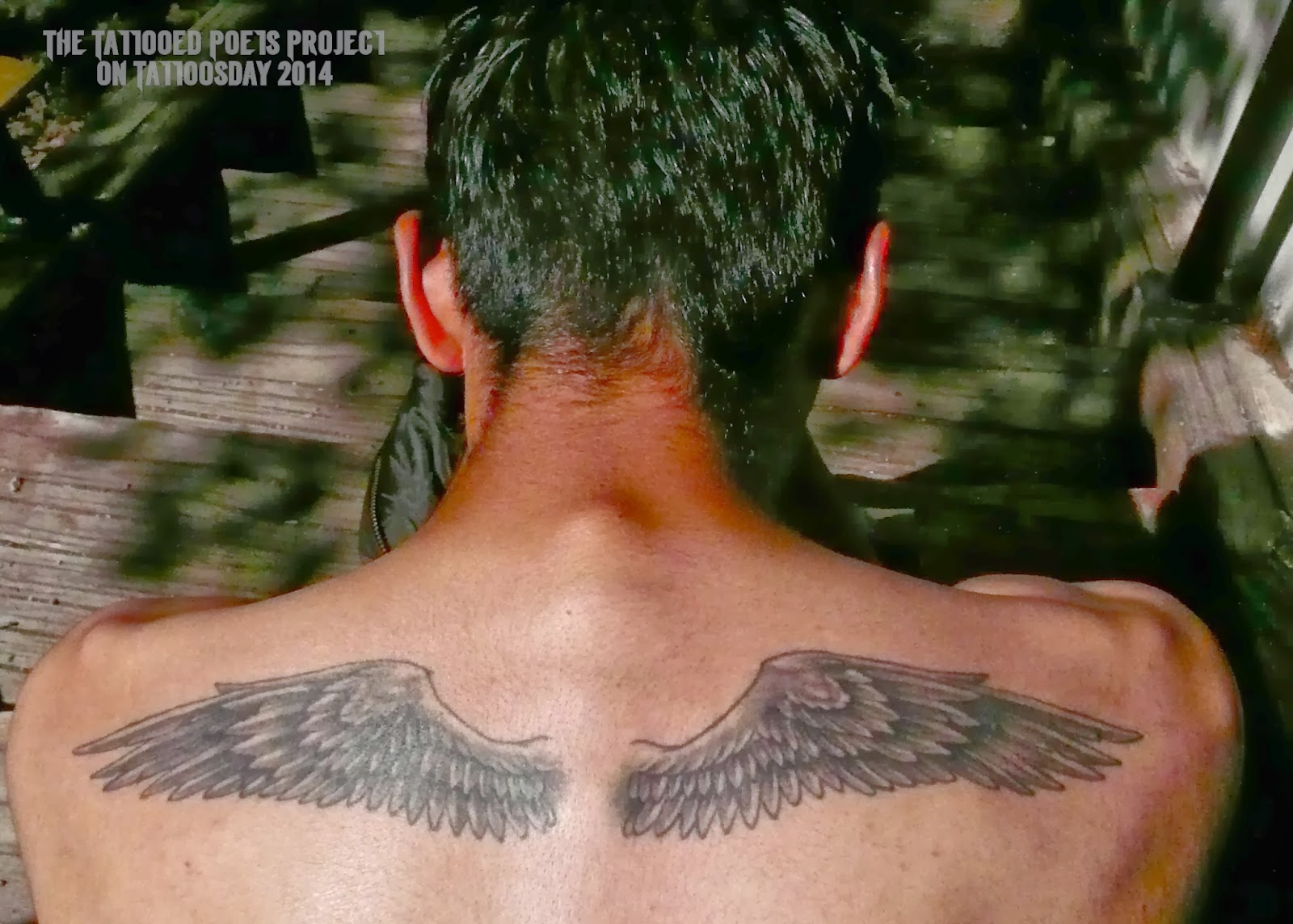 Marcelo told me this was the first time he has ever let anybody take a picture of these wings, so we're definitely honored that he agreed to share them with us here on Tattoosday. Why is this only the first time? I'll let him explain:


"The details of my tattoo are simple and rather unfortunate, as you will see. I didn't google 'best tattoo artists in the world/US/California,' nor did I really bother with much research into the artist. It didn't cost thousands of dollars and the shop where it was done closed two months after my short visit.

Seven years ago, my then girlfriend (now wife) and I had broken up and I was completely devastated. I spent the summer wallowing and meeting with her mom (because her mom really liked me) to see how I could talk to her again. After two months of pitiful despair, I saw her and the first thing I told her when she asked me how I was doing was to tell her that I got a tattoo, as if to say I was now doing new things. When she asked what it was, I told her it was wings across my back (cliché, I know). The funny thing is that I didn't have a tattoo when I told her.

She was curious to see but I told her it was healing and that I didn't want her to see it. To cut to the chase, it got us talking again. My biggest problem, then, was to actually get the tattoo. I borrowed some money and went to the first shop I found, asked them what to put and left three hours later with what you see in the picture. I never asked the artist's name and only remember that the shop was called Cherry Bomb Tattoo [in Marysville, California]. It isn't glamorous but it got my wife and I talking again. We started dating soon afterwards and four years later were married. I actually never told her that I got the tattoo only after seeing her until recently and she just laughed. So, it wasn't expensive, thought out for months, or even wanted at the time, but I don't regret it for a second."

Fortunately, Marcelo's wife has a sense of humor, and we appreciate his sharing the story with us.

Here's a poem from Marcelo:

Poem that Disappears at the End

I lit a cigarette
and shot a bullet of smoke

that went right through you.
The ember drew the shadows around our shoulders.

Your body was the darkest thing on me,
full of panic and thirst.

You peeled my eyelids back and said
look at me, look at me goddamn it.

So I did. Neither of us knew what we wanted,
but would do anything to have it.

Have we just, or will we barely?

Marcelo Hernandez Castillo came to the United States undocumented and is currently a “Dreamer.” He is a Canto Mundo fellow and an MFA candidate at the University of Michigan where he was a finalist for the Theodore Roethke Prize. He has received fellowships to attend the Squaw Writer’s Workshop, the Vermont Studio Center, and serves as resident artist at the Atlantic Center for the Arts. With Robert Hass, he co-edited the Squaw Valley Review 2011 and his recent work can be found or is forthcoming from Jubilat, The Journal, and Devil’s Lake, among others.

Thanks to Marcelo for sharing his poem and tattoo with us here on The Tattooed Poets Project!