Our next tattooed poet is Raena Shirali, who shared several of her tattoos:


The first tattoo is the umbrella that appears to be falling from her right shoulder. Here's another look: 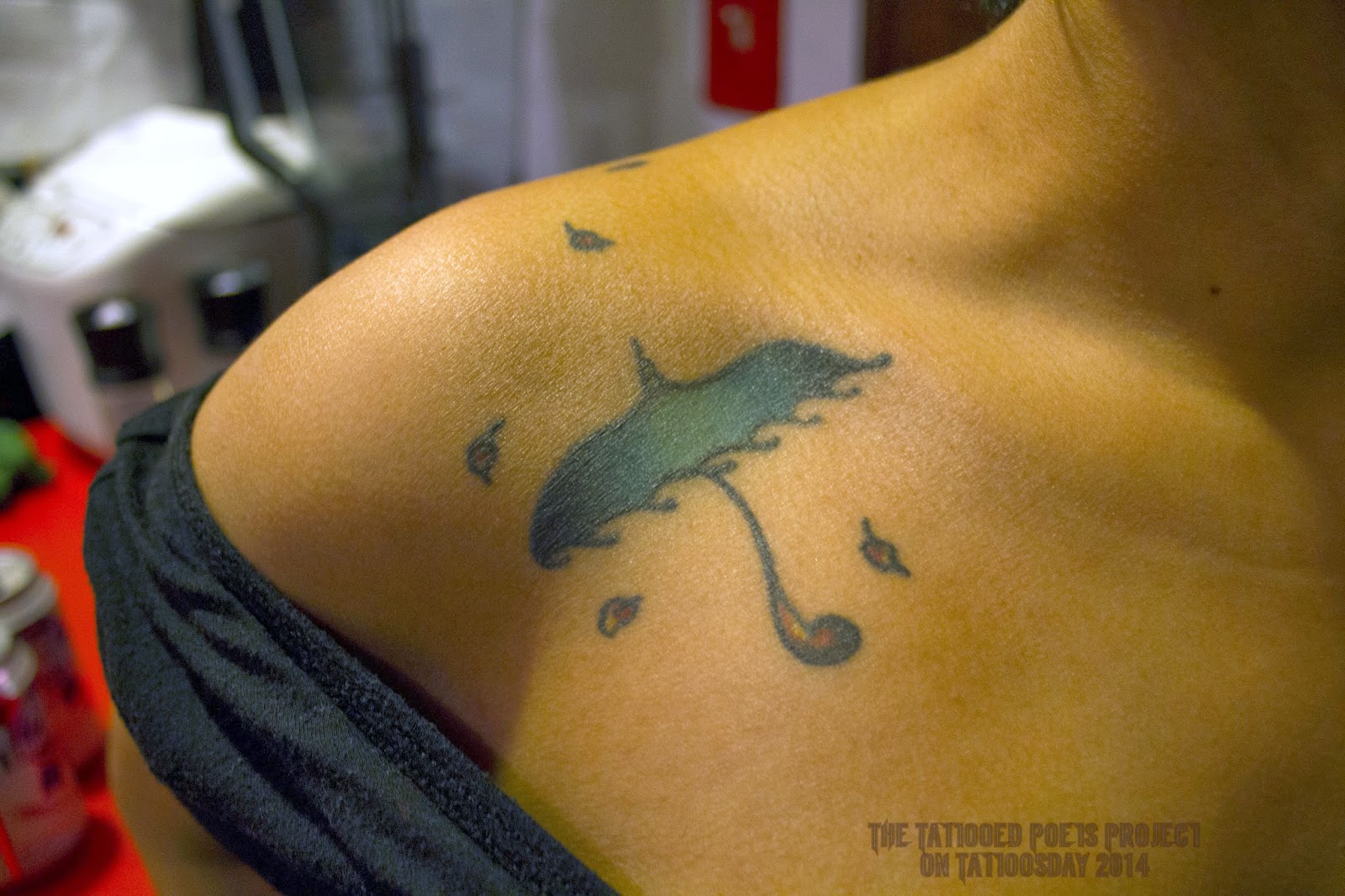 Raena explained that "the umbrella is taken from album art for the album "Illuminate" by the band Lydia." 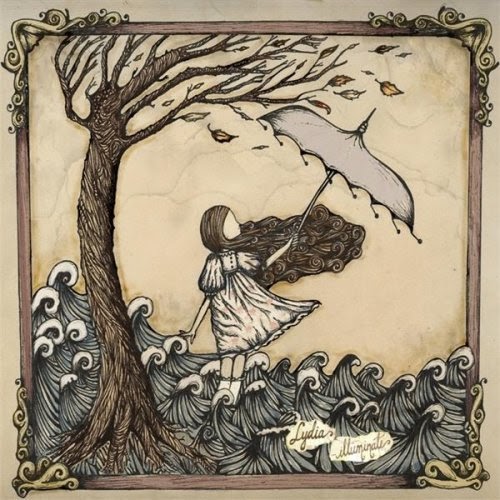 Raena elaborated, "More than being a symbol of the band or my dedication to their music, for me it symbolizes protection--specifically self-protection--and its placement under my right collarbone makes it kind of a second, parallel heart of sorts." She added, "It's about being your own shelter, or making your own shelter."

The leaves in this piece actually float over the shoulder and can be seen with another of Raena's tattoos: 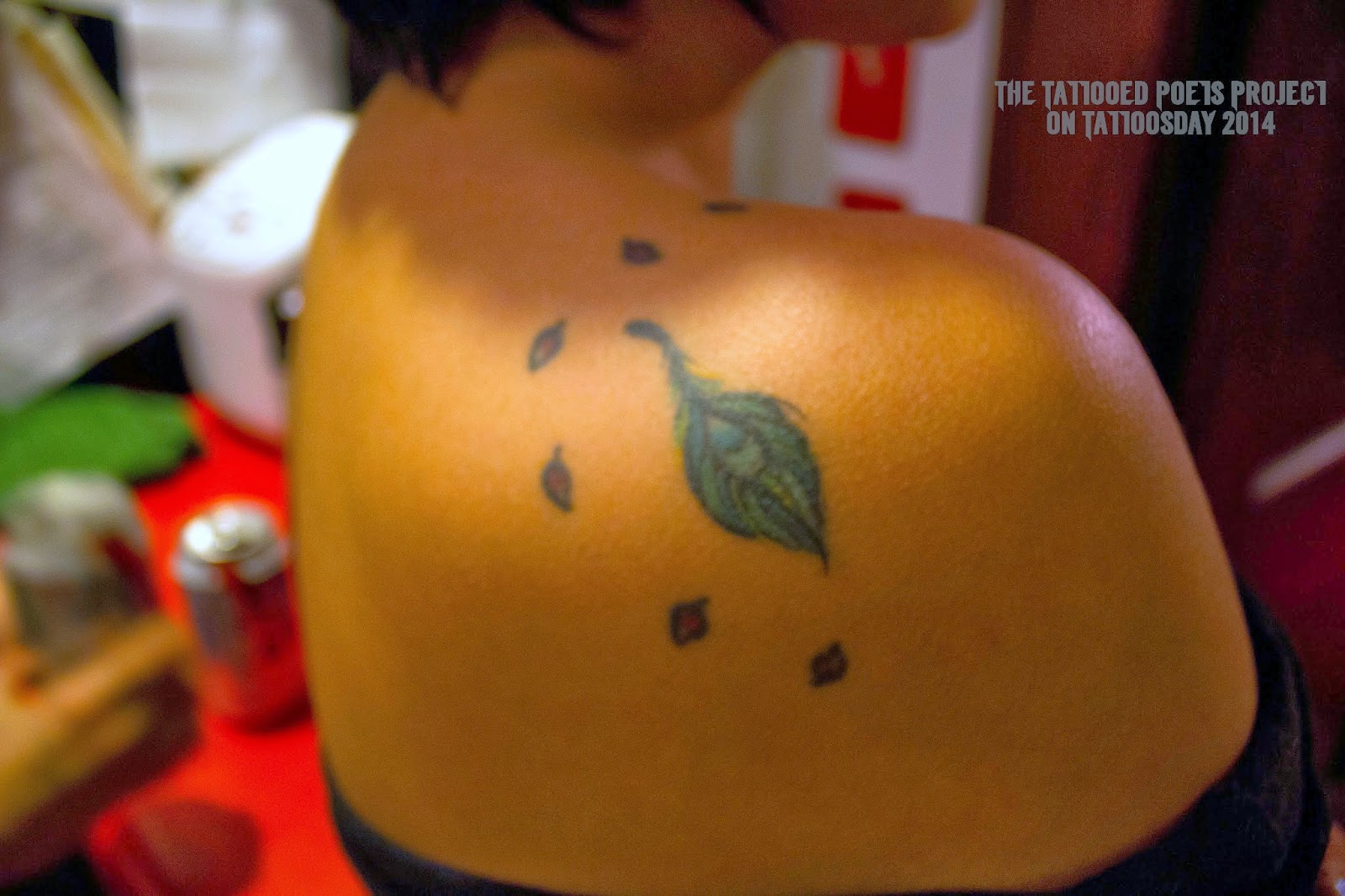 Raena said that this peacock feather on her shoulder is meant to honor both her grandmother, whose favorite bird is the peacock, as well as her Indian heritage. "I was interested in the feather being rendered such that it mimicked the shape and gesture of the leaves around the umbrella," Raena explained.

She credited the umbrella and the peacock feather to Kelly Borders in Savannah, Georgia. Borders is currently at a shop called The Butcher.

Raena also shared this literary tattoo on her ribs: 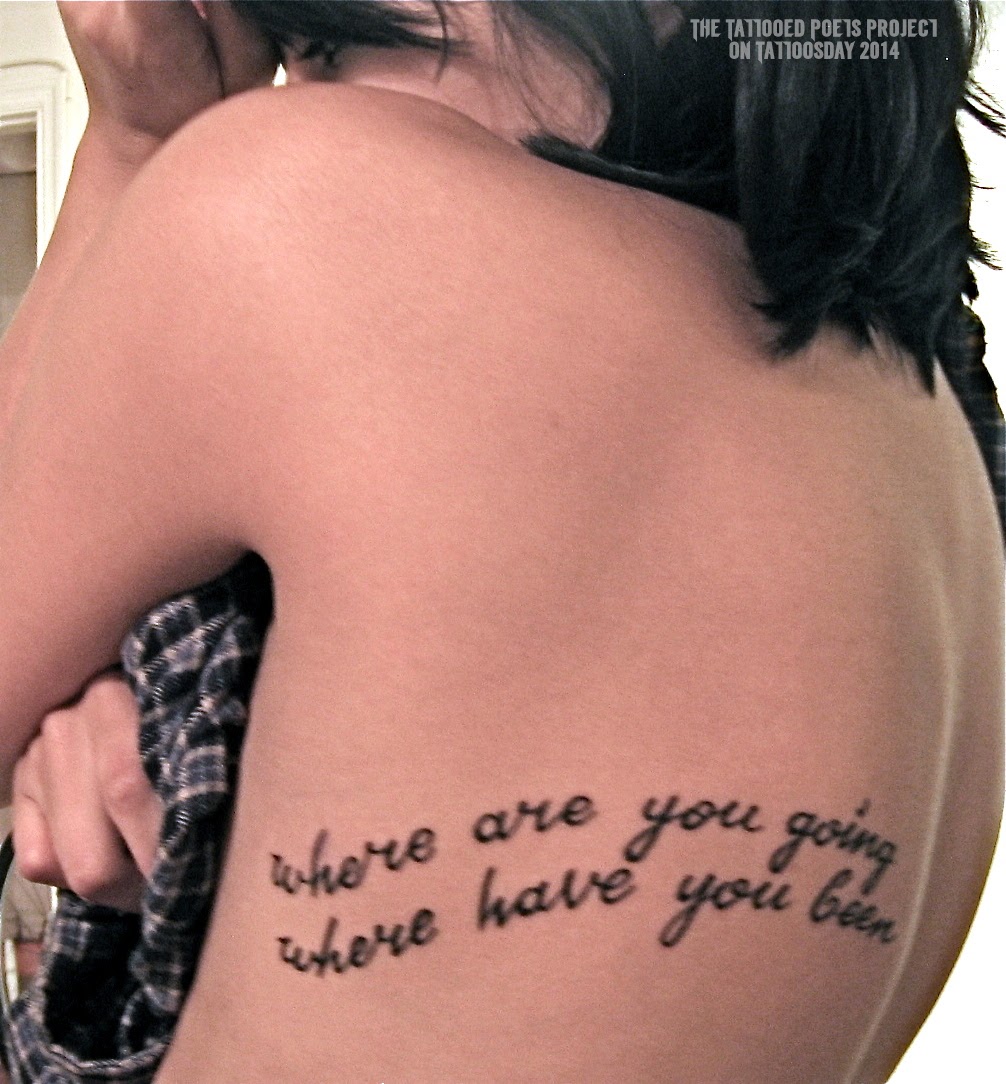 This was Raena's first tattoo and it was also inked in Savannah. The handwriting is that of the artist amd "Where are you going, where have you been?" is the title of a Joyce Carol Oates short story. You can read it here.

And finally, here is an ampersand: 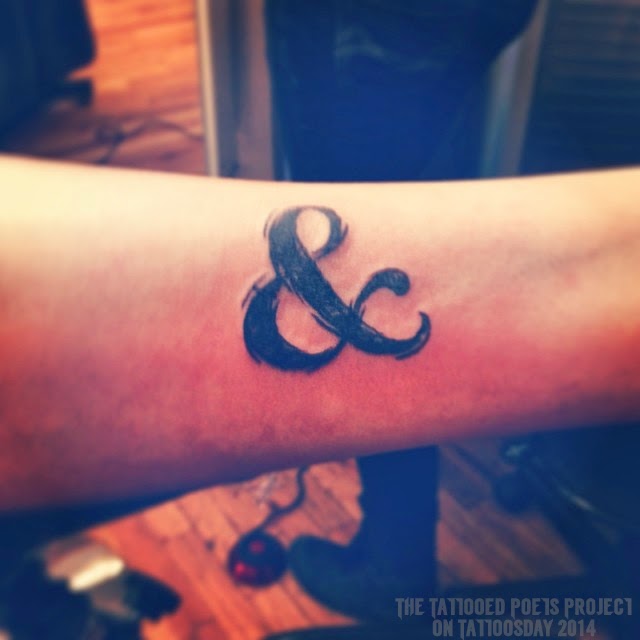 
"The ampersand was created by Alison Reber at Short North Tattoo in Columbus, OH. I didn't want it to be entirely filled in, for it to look too much like font, so there are finely drawn lines throughout that indicate a sketchiness. I like that idea: that punctuation--really that anything we write--is sketchy. In both senses of the word."

Ampersands are popular tattoos among poets - click through the tag at the bottom of the post to see other examples.

when you left, you bought me a royal, & i thought,
letters.
i thought,
artifact.
it was unwieldy without a case,
with a spool that didn’t belong.

that this is a musing &

i am out of ink. if i could measure
your absence, i would stop writing
in conditionals; i’d say

in response, you would thrum the lip
of your mug, cold coffee.
you would
shift. noiseless.
you’d write me

tell me
not to cringe—my ears ringing
in the aftermath of enter’s trill.
tell me
to accept it:

the spool only had red ink, so everything
we wrote all weekend felt like a blood oath,

soft clicks you made on the sheet of printer paper

Raena Shirali is originally from Charleston, SC, and is currently living in Columbus, OH, where she is earning my MFA in Poetry from The Ohio State University. Her work has appeared or is forthcoming in Banango Street, The Boiler, Boston Review, Fogged Clarity, Four Way Review, Muzzle Magazine, Ostrich Review, Pleiades, and The Nervous Breakdown. She recently won a 2013 “Discovery”/Boston Review Poetry Prize, and is Reviews Editor for The Journal.

Thanks so much to Raena for sharing her poetry and tattoos with us here on The Tattooed Poets Project!