Our next tattooed poet is Evan J. Peterson, whose tattoo resonates with the one we posted earlier today, and with the solemnity of this Day of Remembrance: 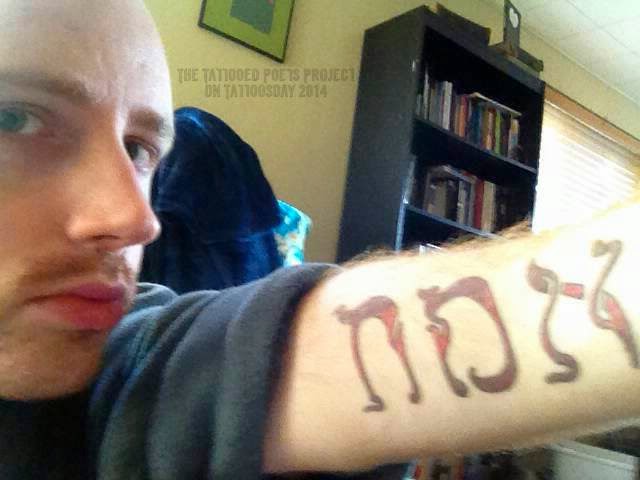 
"This tattoo is my first and only tattoo so far. It's Hebrew for 'Truth.' It's Emet, read from wrist to elbow. This is also one version of the Kabbalah spell that brings a golem to life. Golems are Jewish protector spirits created by animating clay, imbuing lifeless matter with divine energy. Adam of Eden was the first golem, according to some legends. I designed the art nouveau font myself, and it was perfected and transferred to my body by Roni Falgout at Hidden Hand Tattoo in Seattle, Washington. This tattoo is a prayer for Truth, to be truthful to myself and to others. I got it to commemorate 10 years being best friends with my main man Mykol, to celebrate my MFA and first finished manuscript (which has a lot to do with golems), and to mark my entry into recovery from addiction. It's somewhat ironic that I have Jewish ancestry, which is supposed to make tattoos unacceptable, but my tattoo is in Hebrew as a way of reminding me of those very ancestors. No regrets."

Evan also shared this poem with us:

My body museum, haunted by its own curiosities—
a cabinet of wonders: tumescent chest,
a cavity of breakthroughs, bursting;

this torso, cage of ribs, the bird inside grown wan
since the clipping, stuffed now with batting,
displayed like the Ashmole dodo,

the double heart clenching, bifid, a wounded
gypsy moth pumping asymmetrical wings,
the halves joined not by love but wire;

that abdomen, distended by marvels, organs in pairs,
trios, like the shared trunk of joined twins,
straining the stitches to hold it all in;
three children’s livers, pristine, unmarked by absinthe,
unsoured by laudanum, three milk-fed
miracles, drawing poisons from this well;

this auxiliary breast, fat lurker beneath the pectoral,
leathery nipple, hot as a witch’s tit in a copper
brazier, to suckle infernal familiars;

an extra lung, sponge for oxygen, drawing plenty,
fuel for the flames at the core, goblin forge,
a forest fire struck by one lucky bolt of light;

this skull inscribed, Hebrew scratched on the inside,
illuminated by the flash: ת מ א , Emet, Truth,
to crack open and rub off one glyph for Death;

the brain in its cradle, swollen, backed up to the wall,
the caul pinched together, cauterized, a barrier
between tissue and fluid, envelope of genius;

whole corpus a jar of captured lightning, ultraviolet,
the nerves like taut wires, humming
seven feet from brain to heels–

here is my body, my rarae aves, my cartography.
Here is called only Terra Incognita. Here

Evan J. Peterson is author of Skin Job (Minor Arcana Press, 2012) and The Midnight Channel (Babel/Salvage Press, 2013) and volume editor of the Lambda Literary Award-nominated Gay City 5: Ghosts in Gaslight, Monsters in Steam (Minor Arcana Press & Gay City Health Project, 2013). His poetry, fiction, journalism, and criticism have appeared in Weird Tales, The Stranger, The Rumpus, Assaracus, Nailed, Court Green, and Aim for the Head: An Anthology of Zombie Poetry, from which his poetry was excerpted in The New York Times.

Thanks to Evan for sharing his tattoo and poem with us on The Tattooed Poets Project on Tattoosday!