Our next tattooed poet is Andrew Mobbs, who sent us this tattoo of his family crest: 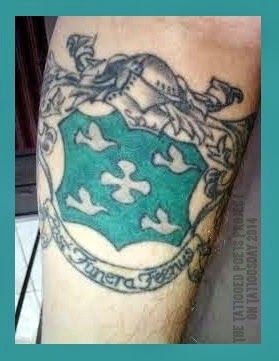 "After conducting some inconclusive research, I discovered that my ancestry on my father's side is either English, Scottish, or both. I found an image of the painted crest online, so I used it as the basis for my tattoo. 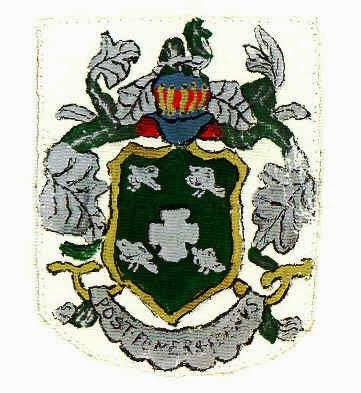 The Mobbs Family motto is Post funera feenus, which translates into 'an interest after death.' The tattoo is displayed overtly and proudly on my left forearm."

What guards you, then, is a willow hoop:

inches in diameter, webbed with blood-red
yarn, adorned with feathers and beads, first
tied together by Ojibwe hands, brown and

splintered, a stone's shot north of the Great
Lakes. The stretched quadrilaterals, those
subconscious gatekeepers, filter out that

which longs to haunt you. Someday, one will
break tradition and seep through. Worry not;
simply wake up next to me. Feel it shrivel,

like so many things, in the heat of our sun.

Andrew Alexander Mobbs, Arkansan born and bred, has been writing poetry for a decade, primarily as an undergraduate student at the University of Central Arkansas and as a Peace Corps Volunteer in Mongolia. His debut chapbook, Strangers and Pilgrims (Six Gallery Press, 2013), was recently released, and his work has also appeared in Deep South Magazine, New Plains Review, Calliope and Ghost Ocean Magazine. Most recently, one of his poems was nominated for the 2014 Pushcart Prize. Currently, Mobbs co-edits Nude Bruce Review, a nonprofit online literary magazine, and is a master's candidate in TESL/Applied Linguistics at Northern Arizona University. When he's not writing or grad schooling, he enjoys daydreaming, playing racquetball and walking around aimlessly in his moccasins.

Thanks to Andrew for sharing his poem and tattoo with us here on Tattoosday's Tattooed Poets Project!