The Tattooed Poets Project: Joshua Kleinberg's Tattoo is Worth It

Our next tattooed poet is Joshua Kleinberg, who sent in this photo: 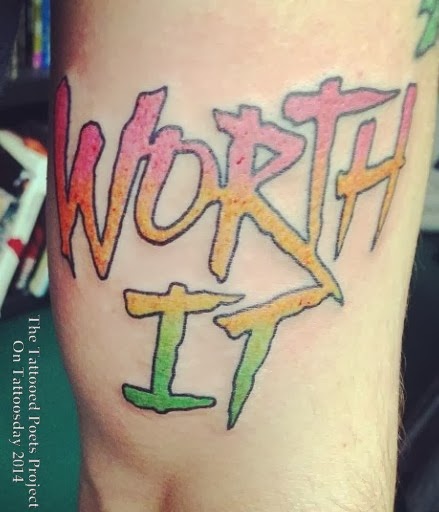 
"The tattoo was done by Brad Stevens at New York Adorned. It's mostly a reminder, for when I'm in a depressive funk, that things are, like, worth doing. Things like getting out of bed and showering and making art and walking across bridges. The font was basically stolen from the movie poster for an '80s dirt biking movie called 'Rad,' and the coloring was inspired by those awesome/awful Spring Break shirts."

Joshua also submitted this poem, which appeared previously in ILK :

Every time you write a poem that isn’t a villanelle,
you are rejecting the pertinence of the villanelle form.

By disliking dubstep, one implicitly votes
for a world in which dubstep doesn’t exist.

Fabulous dreams are an argument against
whatever you do with your days.

It’s a well-known fact that most stars are satellites
and most satellites wish they were rock, still.

When you are sad your eyelids gain mass.

If you cry hard enough, you do not need to shower.

.9% of smokers die every year, which means
you’re pretty much definitely not getting past
a hundred and eleven (if you smoke).

Beats headphones by Dre sound like farts in a Folgers can.

A well cared-for cast iron skillet
will outlive you and do more for your family.

By keeping on, you imply consent
for all disasters everywhere, be they of mining
or hurricane breed. Be they tossed bottles,
or midsection weight gain, or overtime losses,
or malls.

Three in eight car accidents
are demonstrative tropes for
hardcore albums you no longer like.

When you write a poem and say it’s not a poem,
you declare a tiny war between logics.

When declaring a war between logics,
a certain decorum is customary.

Place your hand in your unbuckled mouth
and spread the palm wide, like a fire.

This may be repeated up to four times,
and if done correctly will result
in a glut of anarcho-communal despair
and a feeling like fuck I don’t know.

When all else fails, dig a hole.

When all holes fail, build a hill,
and climb it, and stand there.
And lay there, on your back.
It doesn’t really smell like anything, does it?
It doesn’t even feel like it’s winter.

A person I don’t like gets 21 cents
every time I buy anything these days.
Because I never fucking carry any cash,
and I just have to have my cheese-
double-cheeses. Can you hear it?
My belly is rumbling.

But when I re-read a book that once made me cry,
I admit what I feel is not hate.

And when I set the book down
before it gets to the good part,

and sign in to something and look,
I’m learning my position in space-time,
accepting my deficient attention.
And the truth is there’s no one there scowling,
but whenever I dream of my childhood,
I’m always stuffing my pockets with Skittles.
Now we get texts that say, “Please, don’t ignore me.”
We pull them from our pants like mysterious flowers,
and study them for a long, long time.

In the night, electricity sleeps in the sockets.
You fall asleep and dream about it—14 rays
of misty white, stacked in ghostly twos,
tethering you to the center of the room.
Your lungs inflate and droop like a battery indicator,
on a screen.

It’s just—it’s only that: things are never transforming,
only filling and collapsing—
lightning pouring from ground to cloud,
electronic shifts in the gray of the brain,
inverting levels of life
between the dream as it ends and awakening.

It’s the dissipating feeling that fools us,
the limbo of whiteness between, where
we think that we’re nowhere,
and know that there must be somewhere to be.
Something to reach by becoming—
not by popping strategic balloons on oneself,
but whipping the whole joint up into a frenzy.

And sometimes in the autumn, the white sky stands
like a wall, and the treetrunks are orange and thin,
and the sweatered students, brochure-like in the grass,
say hello to each other, needing just the one word.

You can trace, on such days, the call of the kinglet
as it traipses from windchime to world.
But most of the time I’m just partly awake
with four months of coffee staining my teeth,
and in their housings, the papers make nervous decisions,
and the tv’s static is a different sort of silence,
and the birds all go back to before they had names.

I say, Please O Self, you’re all that I know,
please kiss my tough lips and be gone!

The inventory of hand gestures is endless!

Your crossbite is making me anxious!

I’m tired of having to place you in rooms
and account for the width of your stance,
and stare at your wavering gaze
through the knowledge of all of the others.

Joshua Kleinberg is a barback, an MFA candidate in Poetry & Translation at Columbia University and the curator (with Dana Jaye Cadman) of Banquet Reading Series in Brooklyn. His work has received awards from Ohio State University and The Academy of American Poets and has been anthologized in Chorus: A Literary Mixtape (2012, MTV Books). A full list of his publications can be found at gentleslant.net

Thanks to Joshua for sharing with us here on Tattoosday's Tattooed Poets Project!