Our next tattooed poet is Cynthia Dewi Oka, who shares this amazing tattoo: 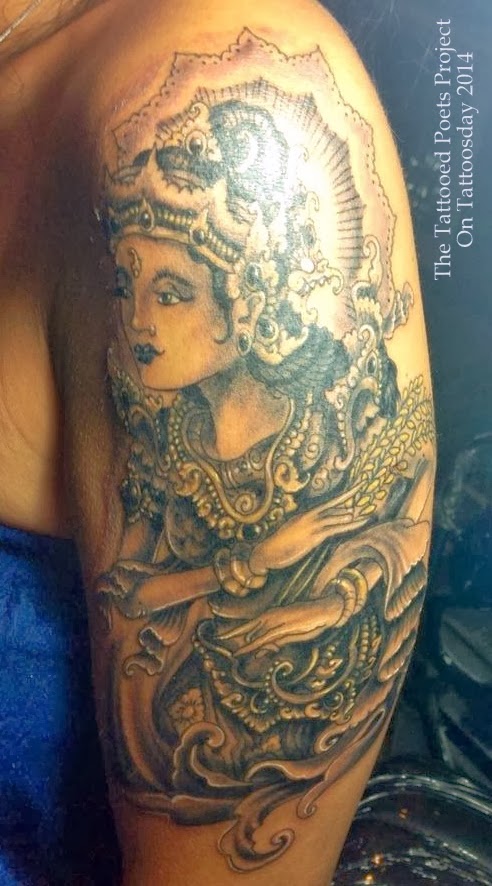 Needless to say, I was thrilled when I saw this stunning tattoo. I'll let Cynthia explain its origin:


"The tattoo on my arm is of Dewi Sri, goddess of the moon, the underworld, rice and fertility in the Balinese and Javanese pantheons. According to legend, she was born of the snake god Anta's teardrop, and then given to Batara Guru, the local iteration of Shiva, as a tribute. Batara Guru adopted her as his own daughter but then fell in love with her because of her beauty. To prevent incest, the other gods and goddesses murdered Dewi Sri. Her body was cut up and strewn on the earth, and from her pieces grew the plants, particularly rice, that would become the staple foods of the Balinese people. She represents the ritual of sacrifice, death and resurrection, and transformation which I experience as integral to the practice of poetry.

The tattoo is a custom design by the award-winning Balinese artist Marwan, who is also a painter, a sculptor and a dancer besides running his own shop, Hellmonk Tattoo. You can see other images he has designed on his Twitter page, @HellmonkTattoo. His shop is in Denpasar, Bali. When I came home to visit in summer 2013, I was looking around for a tattoo artist to do this particular image because I wanted it in a style that is true to Balinese form and aesthetics. Marwan is a friend of a friend, and though he had to be hunted down a bit, it was worth it. Of all the tattoo artists I've worked with he is by far the most professional, talented and meticulous."

Cynthia chose to share this poem which, in her words, "best represents me in the context of this tattoo." It has appeared previously in Zocalo Poets, and in her book of poems, nomad of salt and hard water (Dinah Press, 2012).

bless the round belly, elephant tusk, sago
root straining dark moist earth, tongues
of aloe peeled open, their juice kneaded
into the crowns of old women, gypsum
powder, ash scrubbed into linen and skin
preparing them for touch, the flintlock
at rest with nomads and their fire

bless lightning, the unsung flute, proverbs
spelled in tobacco leaves, owl’s hoot
rippling east, its timbre grained in salt
from the palms of fishermen, a coastline
beaded in pearl, pith of a woman
listening for her name in the throng, iron
sphere, devil’s oar, snake’s teardrop

Cynthia Dewi Oka is a poet, editor and author of the poetry collection nomad of salt and hard water (Dinah Press, 2012). Her recent publications include Boxcar Poetry Review, Ozone Park Journal, JMWW Magazine, Terrain.org, and the Voices of Our Nations (VONA) anthology, Dismantle (Thread Makes Blanket, 2014). Born and raised in Bali, Indonesia, she is currently based in New Jersey and working on her second book. Visit her at www.cynthiadewioka.com.

Thanks to Cynthia for her contribution to this year's Tattooed Poets Project on Tattoosday!