Our next tattooed poet is Martina Reisz Newberry, who sent us this photo: 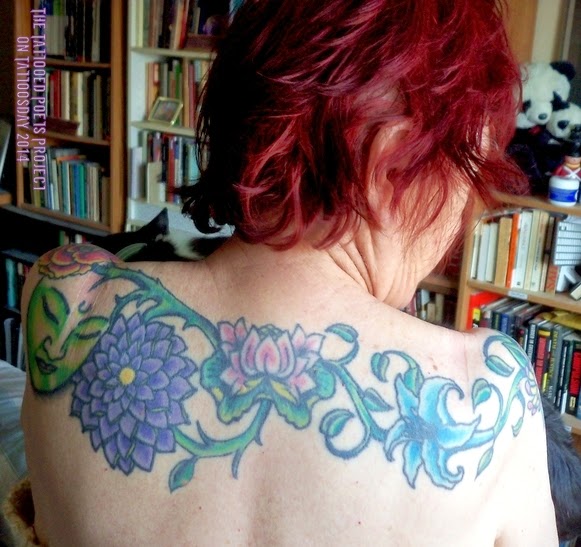 Martina "wanted something beautiful with the added blessing of Lord Buddha’s face and the lotus tabernacle." She credited Body Electric Tattoo in Hollywood, California, with the work and adds, "I love the idea of my body being a canvas for something enchanting."

Martina sent us the following poem:

(from “Learning By Rote” Deerbrook Editions, 2012)

Who are they, these blurred figures
Longing for a digital fix?

They’ve given up peace to play at passion,
they claw at a God who keeps spiritual secrets.

(God has always kept secrets, it is we who tell
every thing we know to every one we know.)

They are us, I fear.
When does mercy kick in?

Whitman waited for mercy to kick in and,
if fame and book sales are any measure,

compassion showed itself eventually.
Whitman whispered “Why not me”

with Spanish tongues as warm and
malleable as communion wafers.

There has to be a ripening along the way.
The dim, disturbing trail of news items

can’t be all there is to trouble our hearts.
Dante Alighieri admonished us to

“remember tonight for it is the beginning
of always,” but we don’t remember.

Death all around us folds and unfolds
like a fan. We are losing things

that were so much more negligible
than we’d ever believed.

Our skillful flippancies
reek of a bad track record

and we use ideograms for the words
we can no longer say (Mother, Father, Family).

We are orphaned in this land of
Barney the Dragon

and Beefcake calendars.
Those blurred figures—

they have regret etched into their bodies.
It’s not a good look.

every word we’ve ever told ourselves. So, then,
where is mercy or the exegesis of mercy?

Somewhere, someone is cutting hair,
dancing to the music of a twelve-string,

baking cinnamon buns, creating ideograms.
Somewhere, someone is staring up

at the enormous sky of a fallen city and
counting transgressions instead of stars.

Martina Reisz Newberry’s most recent book is WHERE IT GOES (Deerbrook Editions, 2014). 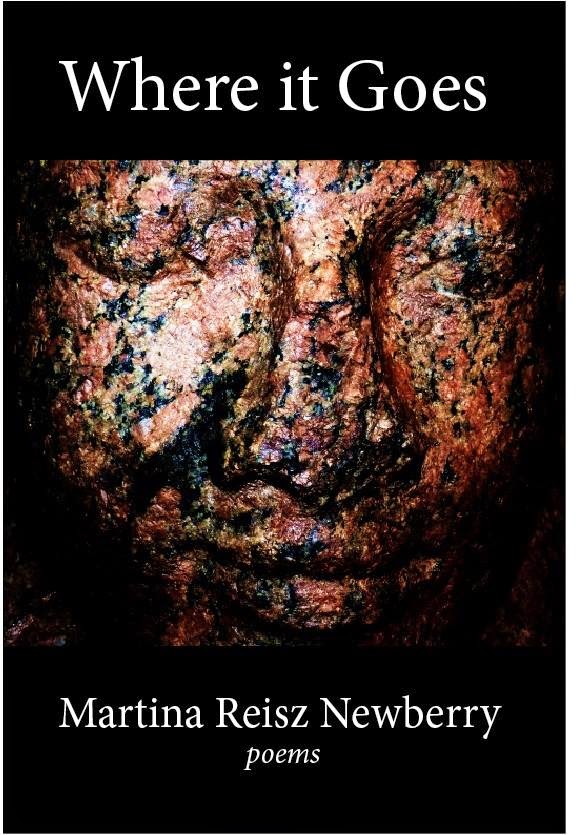 She is also the author of LEARNING BY ROTE (Deerbrook Editions, WHAT WE CAN’T FORGIVE. LATE NIGHT RADIO, PERHAPS YOU COULD BREATHE FOR ME, HUNGER, AFTER THE EARTHQUAKE: POEMS 1996-2006, NOT UNTRUE & NOT UNKIND (Arabesques Press) and RUNNING LIKE A WOMAN WITH HER HAIR ON FIRE: Collected Poems (Red Hen Press).

She is also the author of LIMA BEANS AND CITY CHICKEN: MEMORIES OF THE OPEN HEARTH— a memoir of her father, (one of the first men ever to be hired at Kaiser Steel in Fontana, CA in 1943)—
published by E.P. Dutton and Co. in 1989.

A passionate lover of Los Angeles, Martina currently lives there with her husband Brian and their fur baby,
Charlie T. Cat. Her website is here

Thanks to Martina for sharing her poem and tattoo with us here on Tattoosday's Tattooed Poets Project!