Our next tattooed poet is Michael Stutzman, who shares this colorful piece: 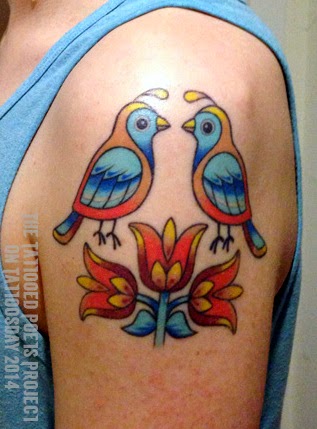 Michael gives us the background of this piece:


"This tattoo by Luis Martins at Lovecraft (Hamden, CT) is inspired by a Pennsylvania Dutch hex motif. Distelfinks ("thistle-finches") and the tulips are talismans for luck, but it’s also in tribute to my paternal grandparents, who had deep Penn-Dutch roots. I go back and forth on if the birds directly represent them or if it’s a more nebulous image.

Luis took the original image and had an idea to translate it into a Norwegian rosemaling style, which turned out nicely. Different people have seen aspects of their own heritage’s folk art in the piece, and I think the clean lines and the limited palette contribute to that perception. I find it hard to write with formal restraints while still connecting the reader to larger ideas, so I have tremendous respect for Luis’ process and craft doing it in ink."

Michael offered up this poem:

After the sherry is poured
and the little women tuck
the roast into its Tupperware,
nothing polite stays behind

to be said. The pretty words
all grab their furs from the bed
and swerve onto the freeway.
You’re left with ethnic jokes, the news

and its body bags, a simmering want
to kiss the wrong person once,
sudden, roughly. Nothing but mistakes
waiting to choke you like slices

of canned pear shuddering
in the silent, red Jell-O. But a deck
of cards, pulled from some secret
apron pocket: There’s the girl you married

too soon, building a span of tricks,
bids, contracts. Safe passage
for good people over the depths ahead.

Mike Stutzman is a writer and teacher from southern Connecticut. He currently teaches healthcare computing for physicians and operative staff. His most recent works are short prose pieces for Proto and Altered Scale. His poetry has appeared in The Chattahoochee Review, Tablet, The Northville Review, and as a month-long daily feature in The Miami Herald as a project of the O, Miami festival, under the pseudonym “Herald Bloom.” Mike posts occasional poetry at http://bittering.blogspot.com (including a poem each day in April.)

Thanks to Mike for sharing his tattoo and poem with us here on Tattoosday's Tattooed Poets Project!