Our next tattooed poet is Aaron DeLee: 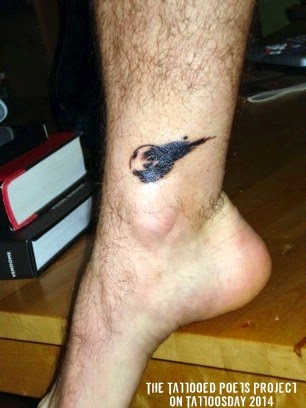 
"I spent over 99 hours and 99 minutes of my life playing Final Fantasy 7; that's as far as the timer goes in the game. It was integral to my upbringing during adolescence (specifically, at 14), exposing me to gay characters and cross-dressing when I didn't have much of a concept for such things. It was a platform that helped me feel powerful, whereas I otherwise felt powerless at that point in my life. It made its mark on me so deeply emotionally, and so, after getting myself out into the world, I decided to show that mark. I had the album art for the game tattooed in March 2008 at the Chicago Tattoo & Piercing Co."

Aaron sent us the following poem:

Must it have a story, like a scar or scare?
Once upon it was a crime to mark oneself

and my father promised punishment for such rash
actions, black impulse. So, I drew

my own illusions and came to the collusion
that these bodies were made to be seen,

made to be word, and image. Imagine meta-
phor made flesh, for there is depth to it

like layers of skin, invariably shedding end-
lessly. This was no rebellion. This was Final.

my skull until manhood bled through; when I was
my own and, with inerasable ink, wrote so.

Aaron DeLee is a Chicago poet. His poems have appeared in Court Green, Assaracus, Mad Hatter's Review, and various other publications. He received his MFA in Creative Writing from Northwestern University in 2013. He is currently training for his second Tough Mudder with his husband.

Thanks to Aaron for sharing his tattoo and poem with us here on Tattoosday!