Our next tattooed poet is Nick Comilla: 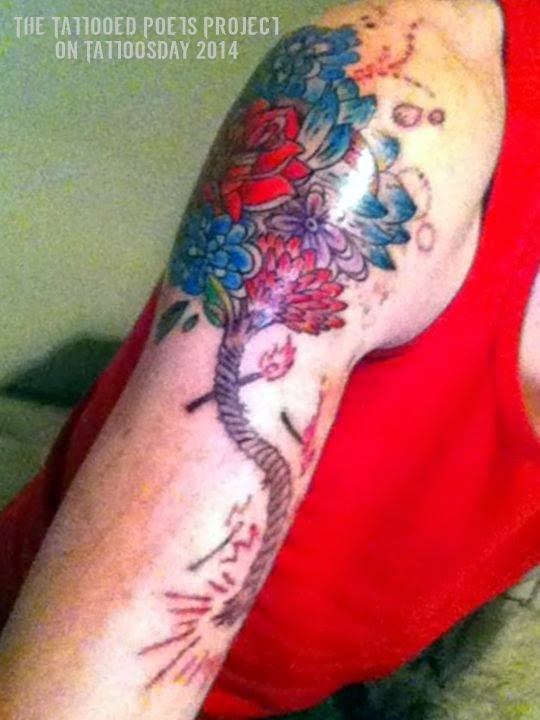 
"I got this tattoo in August 2012 before I moved to NYC from Montreal. The idea was inspired from the Banksy piece that shows a man throwing a bouquet of flowers as if it were a Molotov cocktail.

The piece, which I think of as Bouquet Bomb, was designed by Sylvie le Sylvie at Tatouage Royal. Sylvie did an amazing job of taking my concept and giving it a design... it looked a bit different in my head, but I love the actual image as it came to be. As for the back story... In Montreal (and still today) I was very much into the idea of living an intense, radical, creative and honest existence. I felt that was a key part of my work as a poet. I had a lover or two who were seriously emotionally repressed, shut off people, and I was tired of the way they would try to make me feel guilty/ashamed/bad about being a bit a firecracker of a boy. So, I thought of the piece as kind of a symbol of defiance and rebellion against those tendencies in our society - the tendency to kill the creative/radical spirit, to tell me to 'calm down.' Appropriately enough, when the piece was being colored in, my one best friend/lover was there with me, and he was one of the only people in my life - sort of the antithesis of the others - to never make me feel that way. So I was happy he was there with me, and he just so happens to be covered in tattoos as well, and always changing his hair color, resisting a monochrome existence."

Nick sent us this poem:

Nick requested his poem be removed, as it was being published as part of a manuscript. Congrats to Nick! In the meantime, we're waiting for a replacement poem.

Born on a military base turned ghost town in Rome, NY, Nick Comilla currently lives in NYC. His poems have appeared in Assaracus, Poetry is Dead, Lambda Literary and HOMO Magazine. He is a poetry/fiction MFA student at The New School where he is currently working on his first book project, Ghosts of Montreal.

Thanks to Nick for his contribution to The Tattooed Poets Project on Tattoosday!