Our next tattooed poet is Leigh Ann Hornfeldt, who sent us two tattoos. First, this Northern mockingbird: 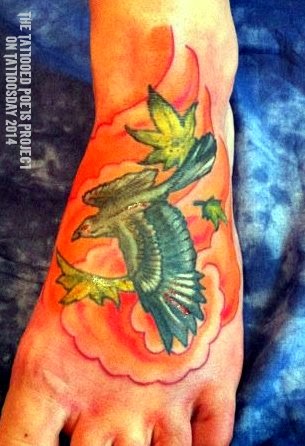 
"I chose this tattoo as I was writing my first collection of poems, East Main Aviary. During this time I became very interested in birding. I can remember the first mockingbird I ever saw: He was walking the rail of our wooden deck during a light rain. From that point on it seemed like mockingbirds were everywhere for me, with one even following me around the inside of a home improvement store. I believe in animal guides and mockingbirds remind me of the power of my voice, to protect my nest, and to always be brave. This tattoo was done by a dear friend, Kevin Hamilton of Bleed Blue Tattoo [in Lexington, Kentucky]."

Her second tattoo was part of the Lexington Tattoo Project, which was referenced in yesterday's post from Bianca Spriggs. 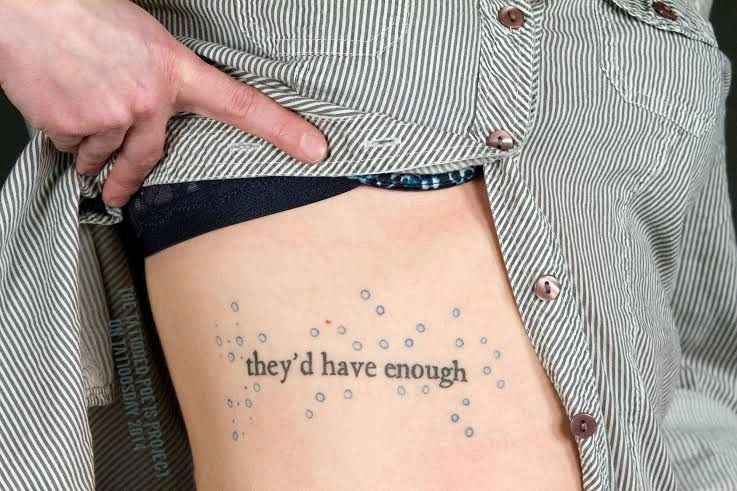 
"This tattoo was part of The Lexington Tattoo Project by Kremena Todorova & Kurt Gohde. A local poet (Bianca Spriggs) wrote a poem for Lexington and over 253 residents of the city had a word or phrase from the tattoo inked on their body. I was lucky to choose the phrase 'they'd have enough' which came at a time when my husband and I were simplifying our lives through purging possessions and focusing on more time with each other and our children. For me this phrase says it all: if we have one another, we have enough. This tattoo was done by Charmed Life Tattoo."

Leigh Ann sent us this poem, as well, which was first published in Spry Literary Journal:

Let’s call him something she said
bent over the veranda, breeze
lifting the silk baby-doll
nightgown above her ass.
He sees all he wants now and then.
The steel in her jawline, the fractured
lily nestled under her panties.
We’ll just call him something, anything really —
you can’t name a thing you’re gonna leave
she said and he agreed and the palm trees
nodded their heads and that night they made love
on rough cotton sheets while the cat tightroped
the deck’s banister and the ocean worried
at the door’s wooden slats. Morning she let him
in again. Took the little loaf of his body
to her chest and breathed in that smell,
that island smell she could never name
even though she knew all the right words.

This one’s paws craved necks,
warmth of jugular, vulnerable pulse.
This one came and went as she pleased,
afternoons bawled till she bloomed herself
inside out. How could anyone say no to this one?
A tortie, a mink coiled around anonymous shoulders,
a needy biscuit-kneader, claws searching for a warm tit.

Oh, she loved him.
She loved him, his face
gouged like the bottom
of a cast iron skillet. She loved
him. Pigeon-toed slink, low bee-hive
growl. She loved him. Litters
of crying kittens all over
the neighborhood. Vagabond.
No good drifter. She
loved him. Half-an ear missing
kind of love. Born out of pity.
I won’t leave you
no matter what you do
desperate kind that keeps
a woman in dark glasses
even at night, the kind
that makes a woman go
weak, weaker, weaker, gone.

Swore she wouldn’t keep him.
Each night tip-toed cold
stone to driveway’s edge,
packaged pink salmon in hand
Here, kitty, kitty
His soupy mew
from the storm drain,
her hands wringing themselves
dry, the sky’s pursed lips
and the dogs whining, always
whining through the window cracks,
eyes rolling in their thick, meaty skulls.

Leigh Anne Hornfeldt, a Kentucky native, is the author of East Main Aviary (Flutter Press, 2012) & The Intimacy Archive (ELJ Publications, 2013) and the editor at Two of Cups Press. She is a Pushcart Prize and Best of the Net nominee, as well as the recipient of a grant from the Kentucky Foundation for Women. In 2013 her poem “Laika” placed 2nd in the Argos Prize competition (Dorianne Laux, judge) and in 2012 she received the Kudzu Prize in Poetry. Her work has appeared in journals such as Spry, Lunch Ticket, Foundling Review, and The Journal of Kentucky Studies.

Thanks to Leigh Ann for contributing her poem and tattoos to the Tattooed Poets Project on Tattoosday!