Our next tattooed poet is Robert Walker, whose work not only helps us celebrate National Poetry Month, but also helps us commemorate Yom HaShoa, Holocaust Remembrance Day. Here he shares this tattoo from his bicep: 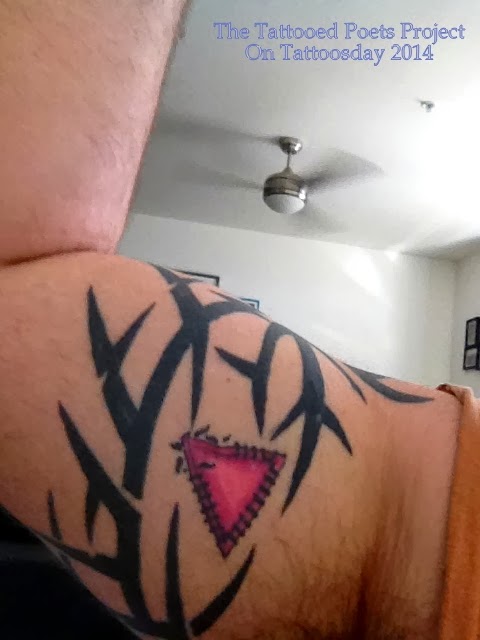 Robert tells us about his ink:


"The tattoo shown is the work of an artist from Christiansburg, VA. I cannot recall the guy's name, but the shop was called Hot Rod Tattoo. The Tribal portion grew out a armband I got when I was 17. The original armband didn't go around the arm, nor was it very interesting. After a decade of sporting a boring, common, band, I decided to go for a half-sleeve. The tribal I have now is a result of sketches by the artist and a lot of free-hand drawing on my arm. I liked the idea of it being drawn free-hand. The ink triangle was inspired the pink triangle sewn to the clothes of gay men during the Holocaust. During the time I got this tattoo I was really interested in the idea of reclaiming labels."

My 18yr old boyfriend
traces my tattoo
with his finger.
Over the ridge of biceps
up to where arm meets shoulder, shoulder
meets chest,  then down
to the pit where coarse hairs edge ink— pink & triangle
& faded. He wants to know
why, months after
the needle last pierced
me leaving the pink triangle held down by black lines like threads pulled through the flesh, the whole thing is still painful & burning
like the places Vaernet
touched us—
like our rooms in the Auschwitz

Robert Walker began writing poetry while playing bass in the cover-band ManHole (an all male group that played songs originally recorded by Courtney Love’s mid-90s band Hole). After ManHole split, sighting artistic differences, Walker enjoyed a brief solo career opening for RuPaul. After a scandal involving George Michael and a public restroom forced him out of the music business he became a High School teacher in rural Florida; where his colorful tales of life on the road lead him to be known as the “eccentric” English teacher. Robert is currently a Knobler fellow in the MFA program at Virginia Tech, and while most of this bio is completely fraudulent Robert does have poetry in or forthcoming from Ashe’: The Journal of Experimental Spirituality, Knockout, 5AM, MiPoesias, Poet Lore, Pearl, and The Gay & Lesbian Review Worldwide. Robert’s debut collection, The Buoyancy of it All, was published by New Sins Press in 2012. Robert lives and teaches in Orlando, FL.

Thanks to Robert for his contribution to this year's Tattooed Poets Project on Tattoosday!