Our next tattooed poet is Simone Muench, who sent us this photo: 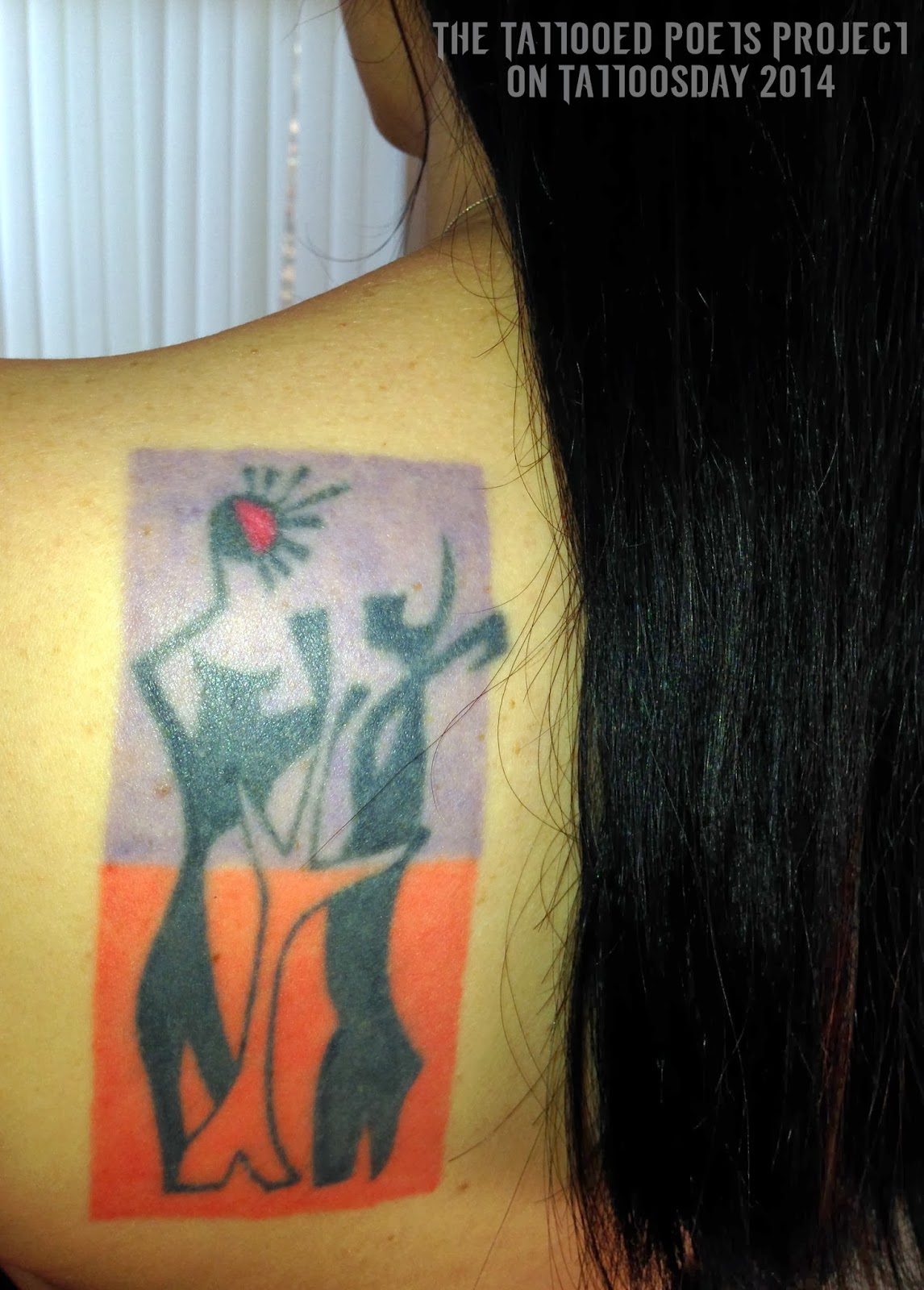 Simone explained the birth of this tattoo in great detail:

"In 1999, after a challenging year, I decided to mark the year by bleaching my hair platinum, getting inked, or going bungee jumping—the tattoo won, and became a birthday present to myself. It was an illustration that had enchanted me for years. I first discovered the sketch in a slim book, published in 1957, which I purchased at a thrift store for $2. 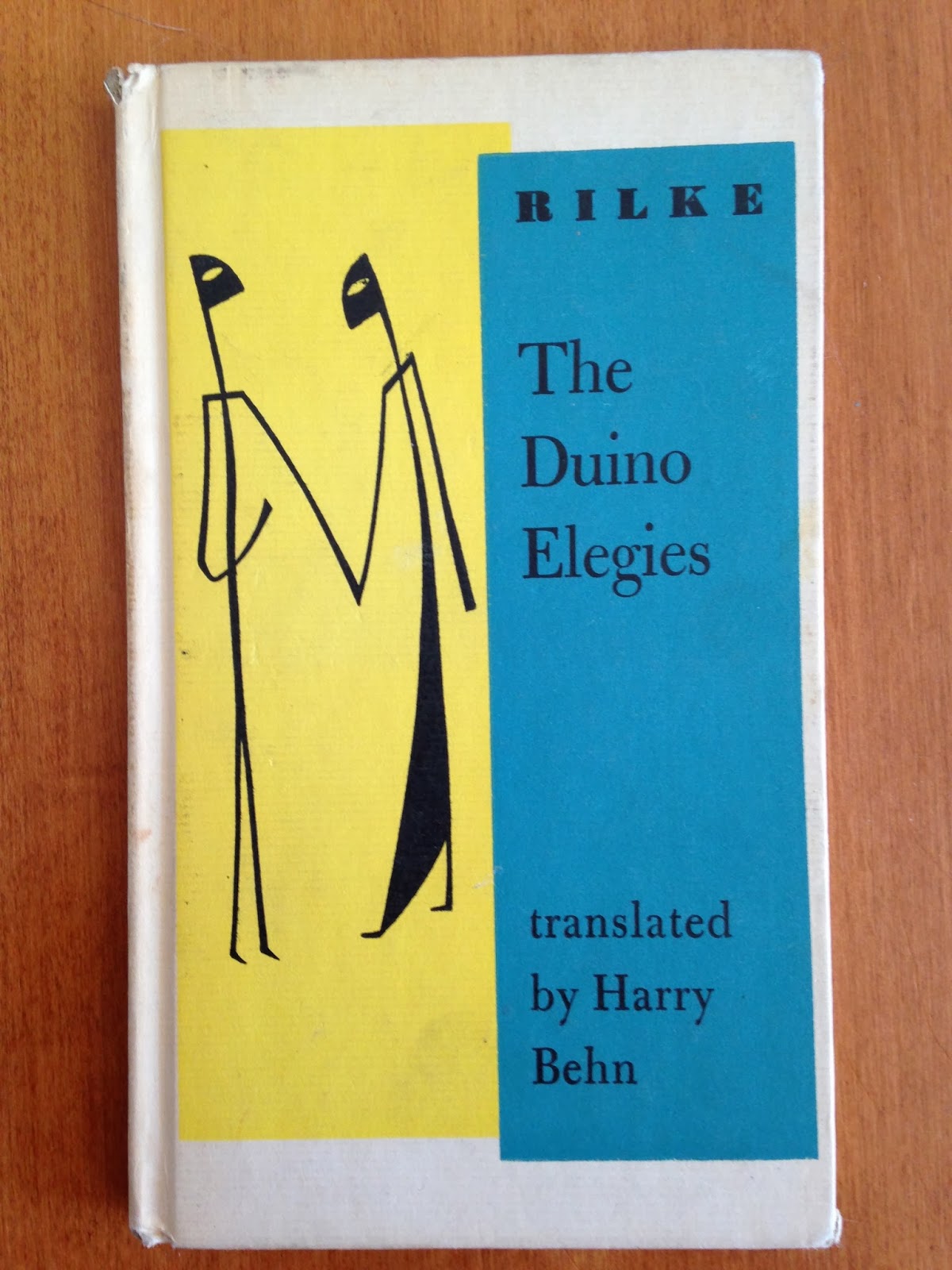 It was a version of the Duino Elegies translated and illustrated by Harry Behn, who is known primarily for his children’s books. I loved the simplicity and strangeness of his Miró-like illustrations. I’m less in love with the translations though I love Rilke, and have always been struck by his notion in Letters to a Young Poet that love consists of 'two solitudes [that] protect and border and greet each other.' 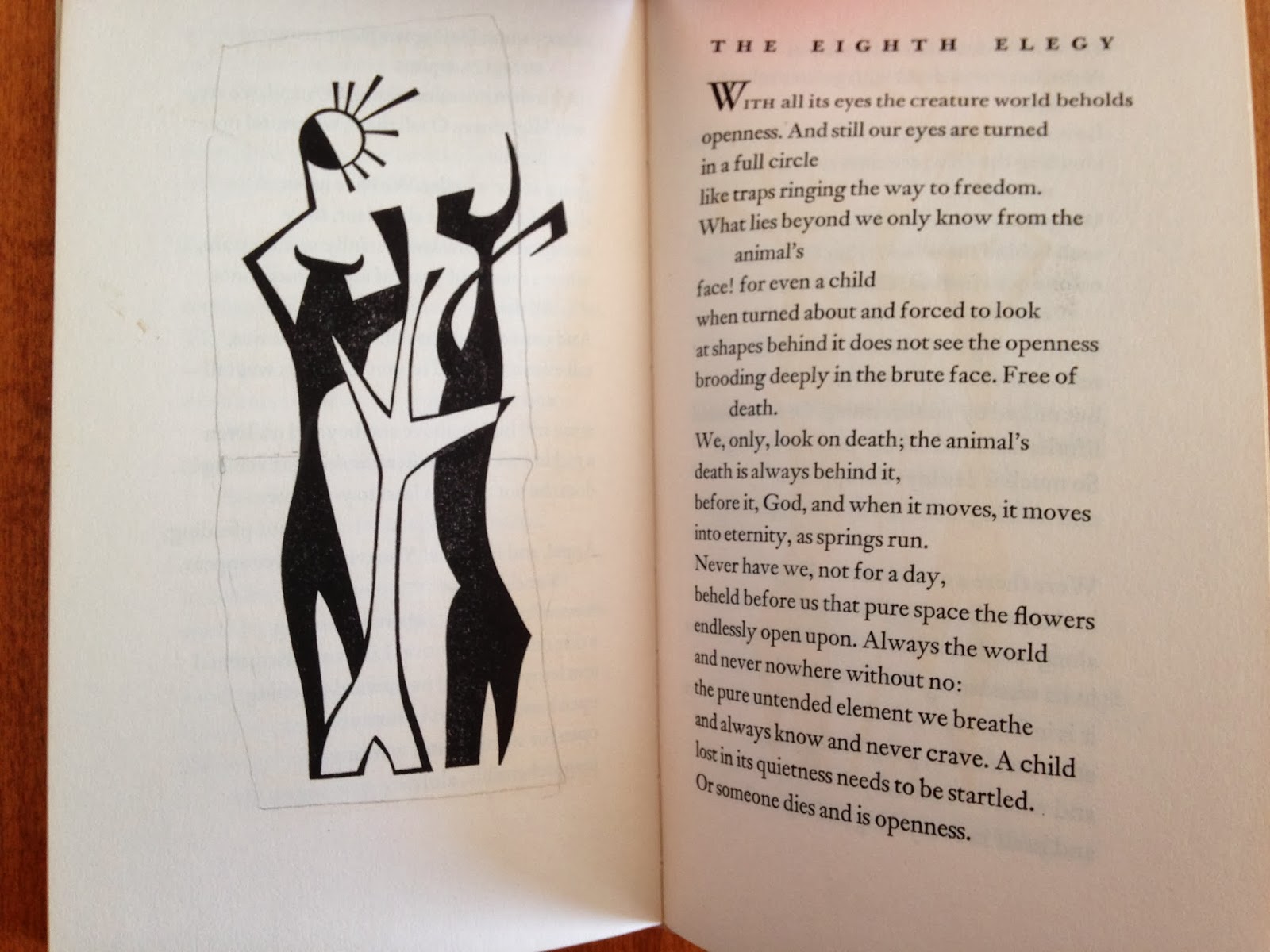 Behn’s sketch echoes Rilke’s quote, as it demonstrates two figures in shadow being both separated and bound by another figure (absence; solitude).

In the days when I frequently played pool, one of my pool partners, Ben Wahhh, offered to tattoo me. Two years previously, in 1997, Ben had opened up Deluxe Tattoo on Irving Park Rd in Chicago. Not only is Ben a wonderful tattoo artist, he’s an incredibly kind human being. You can read a lovely article about Ben Wahhh and Deluxe Tattoo [here].

The process took about 3+ hours and cost me a modest $100 dollars. Afterwards, we visited a Chicago bar called the Black Beetle to shoot pool and celebrate my new, beautiful (and leaky) tattoo, which is now 15 years old and still vibrant; I've only had it retouched once. Few people notice my tattoo nowadays due to the constantly expanding tattoo industry, but when I was freshly inked, many people commented on it, often thinking it was a fake due to the rectangular shape and bright colors. I even had a man approach me while I was dancing at Danny’s Bar, and attempt to peel it off my back because 'it looked like a stick-on.' "

Simone also sent us the following poem, which was first published in Poets & Writers. She prefaces this stating it, "is a cento whose first line highjacks one of the lines from my favorite section of Rilke’s 8th elegy:


And we: spectators, always, everywhere,
turned toward the world of objects, never outward.
It fills us. We arrange it. It breaks down. We
rearrange it, then break down ourselves. (Stephen Mitchell, trans.)

We: spectators, always, everywhere
with goldpinnacled hair & seascapes
of a pale green monochrome,
we wanted to be wolves:
strange animal with its miraculous elusiveness—
a step toward luck & a step toward ruin.

Old circuits of animal rapture & alarm
have stained the sun with blackened love.

The question of the wolves turns & turns.

Simone Muench is the author of five full-length collections including Orange Crush (Sarabande, 2010) and Wolf Centos (Sarabande, 2014), as well as the forthcoming chapbook Trace (Fall 2012 Black River Chapbook Award; Black Lawrence Press). She is a recipient of a 2013 National Endowment for the Arts fellowship, two VSC fellowships, two Illinois Arts fellowships, a Yaddo residency, an Artsmith residency, and the Bright Lights/Big Verse PSA Award. She received her Ph.D from the University of Illinois at Chicago, and now directs the writing program at Lewis University where she teaches creative writing and film studies. She serves as chief faculty advisor for Jet Fuel Review. You can read more at simonemuench.com

Thanks to Simone for sharing her tattoo and poem with us here on the Tattooed Poets Project!