Our next tattooed poet is Geoff Kagan Trenchard, who sent us this photo: 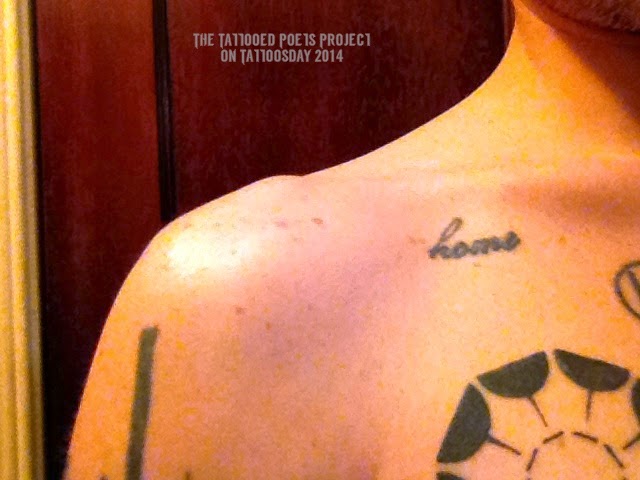 
"I don’t remember the name of the artist, but the studio was Flyrite in Brooklyn, New York. It was done in February of 2009. My wife Emily and I went to get tattooed as a spur of the moment Valentine’s Day date. At the time, we had known each other for nine years. We had said I love you to one another in at least a dozen different cities. We had just spent two years living in cities on opposite sides of the country, only seeing each other every four months or so. That Valentine’s Day, we had made dinner plans, but not reservations. We both came home from work and neither of us was hungry. We decided on this location because it’s the spot where we like to rest our head’s on each other’s chests. While it wasn't a direct inspiration, the song 'Home' by Edward Sharpe and the Magnetic Zeros way playing in a lot of backgrounds that year. Can’t tell you how many coffee shops and bars and restaurants and random stores where we heard that song. The choirs goes Home, let me come home. Home is wherever I'm with you. One of the strangest places the song followed us was in the CD player of a car we rented to drive Upstate for a long weekend. Home. I’m coming home. Home is wherever I’m with you out of the speakers of this random Honda Civic from the rental car company attached to the Marriott Downtown. Like someone had put it there just for us. My eyes were welling up before we even got on to the freeway. Home. I’m coming home. Home is wherever I’m with you. Since that February, we've said I love you in a few additional cities, but many more times in cities we've been in before. We now have two children, both of whom rest their heads on the same spots.

Geoff sent us the following poem:

At night, the blue sky moves
to where it is needed most.
Every morning I am thankful
that it comes back around.

The first thing that ever really scared me
was the wax ball of minutes
that grew in my mouth
when I waited to be picked up.
Every second made me more sure
that no one was coming to get me.

In my head there is a plastic boulder
hovering above a flowerbox.
The only thing that holds it back
is the smallest wooden door stop.

This morning, the shower
had just enough hot water
to get me in, but not enough
to keep me there for long.

When I came back into the bedroom
You were curled around the good pillow.
Smiled like it was still the weekend.

Geoff Kagan Trenchard’s poems have been published in numerous journals including Word Riot, The Nervous Breakdown, The Worcester Review, SOFTBLOW and Pemmican. He has received endowments from the National Performance Network, Dance Theater Workshop, The Zellerbach Family Foundation and the City of Oakland to produce original theatrical work. As a mentor for Urban Word NYC, he taught weekly poetry workshops in the foster care center at Bellevue as well as in Rikers Island with Columbia University’s “Youth Voices on Lockdown” program. He is a recipient of a fellowship from the Riggio Writing and Democracy program at the New School and the first ever louderARTS Writing Fellowship. He has performed poetry on HBO’s Def Poetry Jam, at universities throughout the United States, and in theaters internationally as a member of the performance poetry troupe The Suicide Kings. Penmanship Books published his first poetry collection, Murder Stay Murder. He is currently a Juris Doctor Candidate for the class of 2014 at the Hofstra University School of Law. He lives in Brooklyn and can be found at kagantrenchard.com.

Thanks to Geoff for sharing his tattoo and poem with us here on the Tattooed Poets Project on Tattoosday!

Posted by Tattoosday at 3:00 PM