The Tattooed Poets Project: Justin Bigos and His Grackle

Today's tattooed poet is Justin Bigos, who sent us this image of a huge bird on his arm: 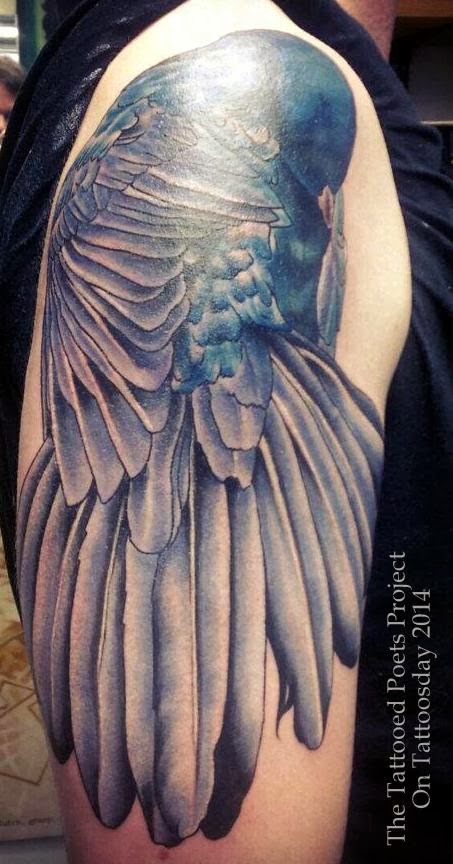 
"I wanted a big grackle on my arm. I had just survived my first year of doctoral studies in English at the University of North Texas, and my first year living in a state I found brutally hot and (sorry, Texans) pretty ugly. In north Texas, grackles are everywhere, and like pigeons in NYC (and I guess all major cities), the grackle doesn't get much love from humans. I chose this photo (which I found online) because it's beautiful, and it shows the splendor of the grackle when caught in certain light, at certain angles. I also like that the bird seems to be conspiratorial, confessing something to itself. I got the tattoo at Denton Tattoo Company. Josh Hurst rendered and tattooed the grackle beautifully. Josh now owns his own parlor, Victory Tattoos."

Justin also shared the title poem to his chapbook:

In my dream last night, back again on the corner
of Avenue J and 14th, a rabbinical student stops me

to ask if I’m Jewish. I show him the framed photo
I carry: a family of nine. Pale faces, strong noses; black hair

parted or pulled back; the children dressed like the parents.
He says, They, are they Jewish? I don’t know, I say.

In my dream last night, Hungaria. The baker of small rolls
says, Can I help you? He means, Are you Jewish?

A loaf of rye, I say. He looks behind him, racks and racks
of loaves, buns, bagels, twists. We have something that is not rye?

he says. And, Why are you saying Hungaria,
Mr. America? I take the steamship to Prague

and all the statues salute me. The young women blow out
kisses like candles, their hair wheat against the scythes

of their cheekbones. No one will let me finish saying,
Will you marry me, or Please, only a sip of your blackberry brandy.

In my dream the twenty thousand pigeons killed in the war
rise thunderous as waterfalls. And so I walk the suspension bridge

greet me with a simple pair of shoes, a jar of herring in dill,
a Cherokee headdress, one black potato, a wine glass

to crush under which foot they will not say.

Justin Bigos is the author of the poetry chapbook Twenty Thousand Pigeons (iO Books, 2014). His poems have appeared in magazines such as New England Review, Ploughshares, The Gettysburg Review, The Collagist, and Crazyhorse. His fiction is forthcoming in McSweeney's issue 47. He co-edits the literary magazine Waxwing and teaches creative writing at Northern Arizona University.

Thanks to Justin for sharing his grackle with us here on The Tattooed Poets Project on Tattoosday!