Our next tattooed poet is Charlie Bondhus, who sent us this image of his Spartan tattoo: 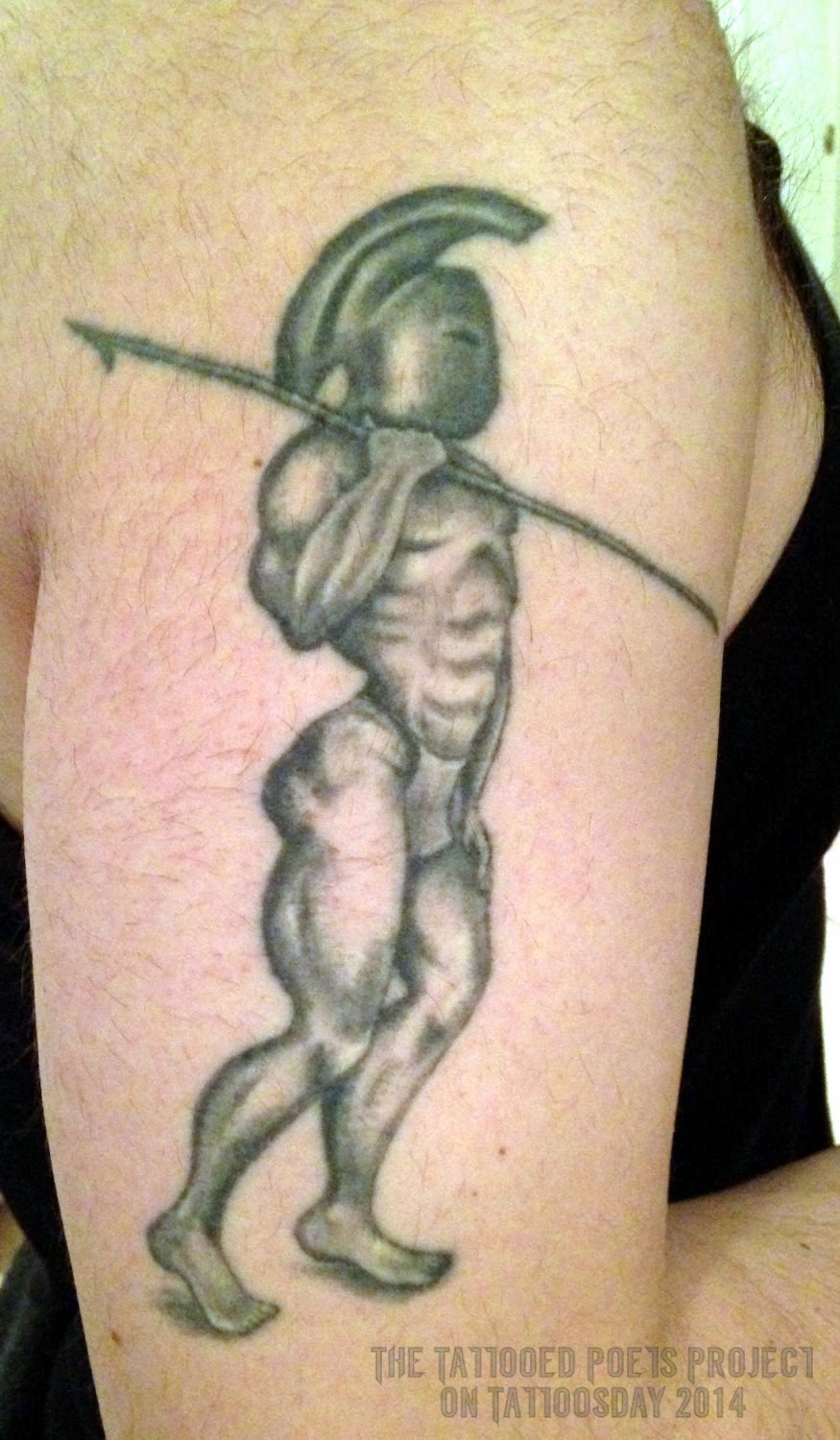 Charlie also provided us with a little back story on the piece:

"I was enamored with the Spartans when I learned about them as a kid. That strong, hypermasculine culture appealed to me largely because it represented a side of myself that wasn't immediately apparent to others, who generally saw me as another bookish kid. As I got older and came to terms with my gayness, I worked to reconcile my love of a 'traditionally masculine' aesthetic with the prevailing stereotype that gay men are sissies. To me, the Spartan on my arm represents a resistance to that stereotype as much as it does a resistance to the hyperproduced, sanitized, overly commodified aspects of gay male culture. Here's a tough, stripped-down man who is both subject--he stands confidently, brandishing a spear--and object--he's nearly nude, muscular body on display. The implacableness of the helmet, the threat of the spear, the hardness of the muscles, stand in contrast to his relative vulnerability from the neck down. I guess in that way he's both a celebration of 'traditional' masculinity and a challenge to it.

Admittedly, the image is based on a Frank Frazetta painting [pictured below], so it's not an entirely original design, but the painting from which the tattoo is drawn appealed to me for all of the above reasons.


It was done at Loonar Tattoo & Piercing in South Hadley, MA; unfortunately, I don't recall the name of the artist."

Charlie also sent us a poem about the tattoo:

Black lines on white skin
shape and shade
a Spartan hoplite
naked
except for helmet, loin cloth,
a wicked spear.

Some might call it
a hollowed standard
Indra or Ares erected
to draw lovers
to the bone pagoda
and its sheathing muscles,
skin-deep courage
like stone engravings
on a temple’s façade.

Yet he knows war
well as he knows my follicles
having taken up the painted spear and
picked and scraped his way
not out of something pedestrian as my bicep
but up from the undersoul,
that place of sedimentation,
false and true histories, inconvenient wishes.

You think it’s just ink
and who can blame you
trained as you are to anticipate
art’s oversimplifications
its symbolic lions
its bloodless piétas?


~ ~ ~
Charlie Bondhus’s second poetry book, All the Heat We Could Carry, won Main Street Rag’s Annual PoetryBook Award for 2013. It was also a finalist for the Gival Press Poetry Award. Previously, he published How the Boy Might See It (Pecan GrovePress, 2009), a finalist for the 2007 Blue Light Press First Book Award, and two chapbooks, What We Have Learned to Love—which won Brickhouse Books’ 2008-2009 Stonewall Award—and  Monstersand Victims (Gothic Press, 2010). His poetry appears or is set to appear in numerous periodicals, including MidwestQuarterly, The Hawai’i Review, War, Literature & the Arts, The WisconsinReview, CounterPunch, The Alabama Literary Review, The Sierra Nevada Review, ColdMountain Review, and The BaltimoreReview, among others. He holds an in creative writing from Goddard College and a Ph.D. in literature from the University of Massachusetts, Amherst. He teaches at Raritan Valley CommunityCollege in New Jersey, and is the Poetry Editor at The Good Men Project.

Thanks to Charlie for sharing his tattoo and poem with us here on the Tattooed Poets Project!